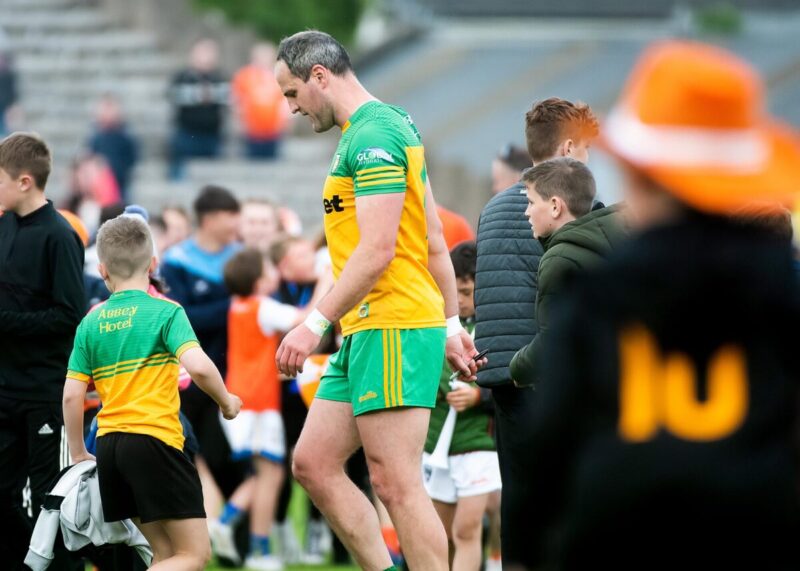 Here’s what social media had to say after the shocking news that Michael Murphy has decided to retire from inter-county football.

The Glenswilly man has been a Donegal legend in the past decade and a half for the senior team since he made his senior debut in 2007.

Murphy has since won five Ulster titles with Donegal and became only the second person to captain the Donegal senior team to winning the Sam Maguire in 2012.

Murphy has also received three All-Star Awards but last night chose to confirm he will no longer play for the Donegal county team.

And there was plenty of fans, pundits and players shocked by the announcement that was made last night.

But the true greatness of Murphy’s playing career is epitomised by the tributes pouring in from fans and players of opposition counties who have lost against Murphy but can still appreciate what he did at the top level.

“People say to me he’s the best player playing for Donegal ever. I say if you cut him in half, he would be number one and two. He’s so far ahead, it’s just unbelievable.”

Brendan Devenney on Michael Murphy a few years back. Not heard anyone put it better before or since. Legend pic.twitter.com/xeSMWUVX1t

Not many retirements stop you in your track but Michael Murphy is definitely one one of them.

I remember going to a league game at Crokes and just watching him for 70 mins.

No exaggeration that he’ll go down as one of the greats, no matter what Colm O’Rourke tries to tell you. pic.twitter.com/h1ky2knrBY

And the legendary Bernard Brogan paid tribute to Murphy, two men that between them had seven All-Stars.

Michael Murphy will go down as a true GAA great! He was a joy to watch and an absolute gentleman, best of luck to him with next chapter 👊 pic.twitter.com/MRB038a8ig

There were plenty of people sharing memories of his greatest scores.

Michael Murphy, the deftest of touches for such a colossus of a footballer, capable of the subtle and the devastating all at once – perfect bit of Murphy magic here, dummying Rory O’Carroll for DCU before scoring – what a loss to that Donegal dressing room pic.twitter.com/e01qgDRzPh

I’ll be spending my evening watching clips of Michael Murphy score the exact same goal over and over again pic.twitter.com/HjzW0CrDJ8

And everything else he’s done for the county.

Michael Murphy retiring is such a blow for football.

I remember the night Glenswilly played Ballinderry and I only realised how fast he was too and was so depressed a Donegal man could be that good!

The game will be remembered for Cass’s wonder point. But Michael Murphy stopped it from going over the sideline – by millimeters. My standout moment from a career of nothing but standout moments. pic.twitter.com/mXtg8rSWXj

The day we all dreaded in Donegal. Heart broken, what a man, all the best to Michael the Gent.

A sad day…but happy that even from 3,000 miles away, I was able to watch so many of his stellar performances on TV…and once, in person at Croke Park…the best footballer from Tir Conaill, ever…

News that no Donegal GAA fan ever wanted to learn, but, alas, all good things come to an end someday.

The greatest ever player to pull on the county jersey has announced his retirement.

What a legend. Michael Murphy – the goat 👊 pic.twitter.com/Ku5OsxyArw

Thanks for the trophies and memories, Michael.

‘A blow for football’ – the reaction to Michael Murphy’s retirement at inter-county level was last modified: November 17th, 2022 by Dáire Bonnar
FacebookTweetLinkedInPrint