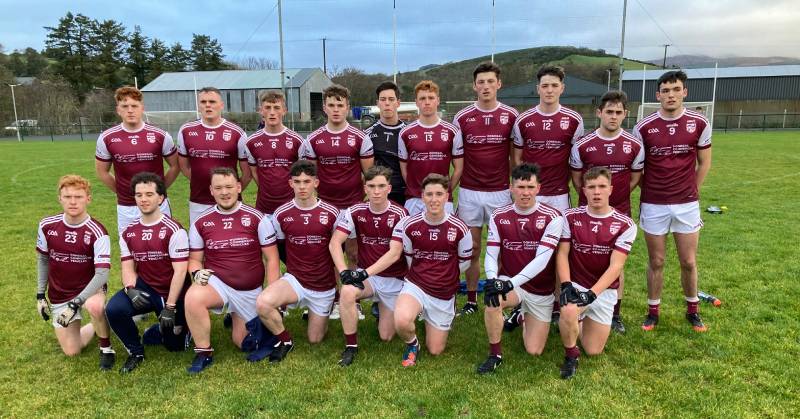 A late goal by sub Conor Black, which put Termon ahead for the first time, gave his team a comeback victory over St.Eunans and ensured them of a place in the knockout stages of the Under 21A championship.

This was a cracking game at the Burn Road between two well matched teams and it took an impressive finish by Termon to win it.

St. Eunans played with the aid of a strong wind in the opening half and led by four points at half-time 1-6 to 1-2, and one wondered if that would be enough to keep Termon at bay in the second-half.

They raced to a 1-4 lead in the opening twenty minutes, Padraig McGettigan pointed early one and then fisted to the net after excellent work by Shane O’Donnell had set him up.

O’Donnell then kicked three quick-fire points from play to put Eunans seven ahead in the 18th minute.

Termon finally registered their first score with Ryan McFadden’s free and three minutes later were right back in the game when Bobby McGettigan fisted McFadden’s free to the net , 1-01 to 1-04

David Boyle and Dylan Duggan added points from play for the visitors but McFadden’s free in injury-time left just four in it at the break 1-02 to 1-06 to Eunans.

Termon started the second-half well and Bobby McGettigan was denied what looked would be a certain goal when he was one on one with keeper Ronan Coady, but the netminder produced a super save to deflect his shot over the bar.

Ryan McFadden’s free left just two in it but Dylan Duggan’s second point of the game quickly made it a three point game again.

Caolan Gallagher added a Termon point but the gap went out to four again with a Shane O Donnell free and Eoghan Doherty point from play for Eunans, 1-5 to 1-9.

The home team then scored three times in succession for the first time in a game , all from play from Aaron Reid , Cian McMenamin and Ryan McFadden to leave one between them 1-09 to 1-10 and game on.

David Boyle’s free put Eunans two up again but with three minutes left Termon took the lead for the first time, Bobby McGettigan won possession out on the left and found sub Conor Black with a super cross field pass.

Black failed to catch the ball cleanly but it didn’t matter as he used his soccer skills to slide the fall past the advancing Coady into the bottom corner of the net, 2-09 to 1–11.

Behind for the first time, Eunans pushed hard to equalise but it was Termon who finished off an excellent second-half comeback with Ryan McFadden’s sixth point of the game to ensure a top four finish in the Group with a game still to play against MacCumhaills next week.