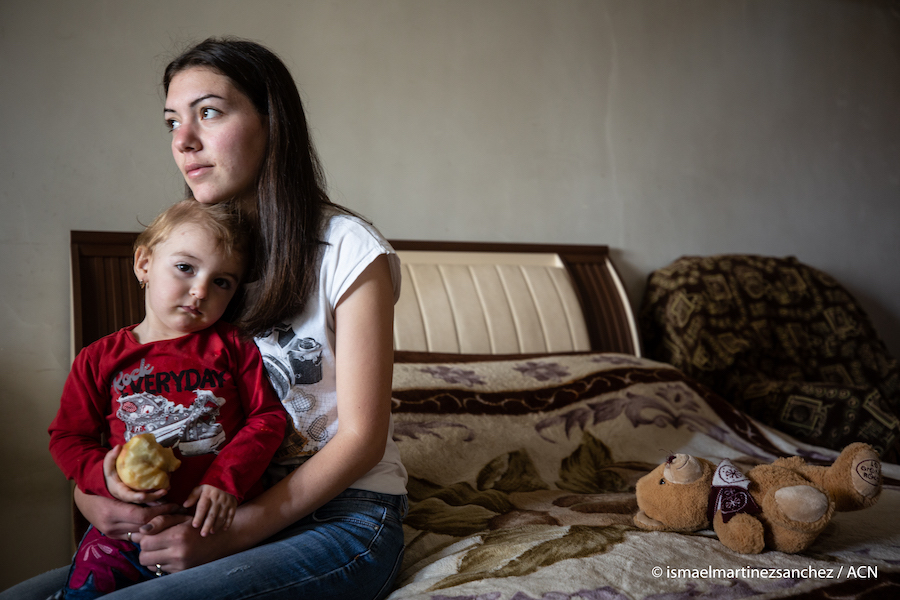 Between September and November 2020, Armenia and Azerbaijan fought a war over Nagorno-Karabakh, a region that is legally part of Azerbaijan but is mostly inhabited by Armenians.

War crimes were reported during the fighting, which saw nearly 4,000 Armenian soldiers killed.

Countless others have been left traumatised. On top of this, around 90,000 Armenian civilians were displaced by the fighting, forced to flee across the border into Armenia. Of these refugees, only around 25,000 have been able to return home to Nagorno-Karabakh. The rest live on in Armenia, fighting to survive.

In Artashat, a small town near where Armenia, Turkey, and Azerbaijan meet, Aid to the Church in Need (ACN) staff members met with a widowed teacher called Lida, a mother of two grown sons. The family were displaced from Nagorno-Karabakh and now live in a run-down house in Artashat that looks like it has been deserted.

Lida has gone through a lot; you can see the weariness in her face. Also in the house when ACN staff members visited were Lida’s daughter-in-law Mariam and her granddaughter Nané. 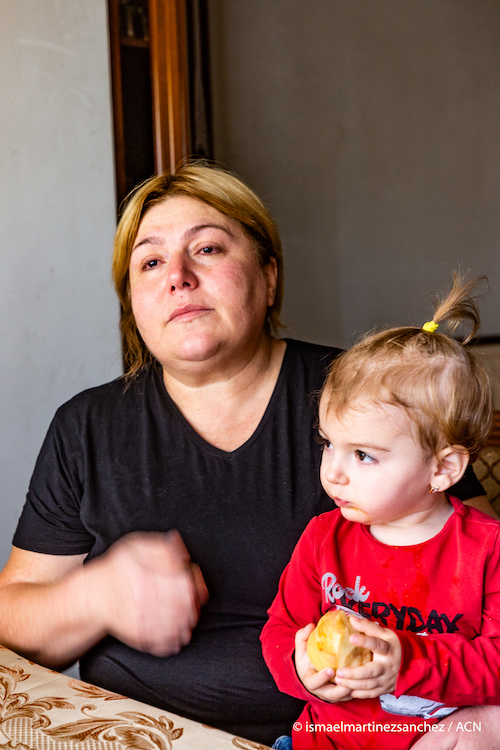 While Mariam made coffee in the family’s makeshift kitchen, Lida told ACN staff about what the family had gone through:

“We had a good life in Nagorno-Karabakh. I have been a widow for many years, but I was able to provide well for my two sons through my work as a teacher. We owned a small house and had everything we needed. This abruptly changed in 2020 when, on 27 September, my two sons left to join the military and fight. They were 22 and 24 years old. This meant that we were alone with my daughter-in-law and the little one when the bombing started. We first tried to shelter under the table. Later, we hid in the cellar with a little food and water. There was already no electricity or running water.

“When the village elders told us that we had to leave the village, we first fled to Berdzor and then, a week later, were transported by bus to Armenia. All we had with us was a suitcase. At first, we were able to stay with relatives in Artashat. But we couldn’t live there indefinitely. We were a burden for the family. We have been living here now for six months.”

The home that Lida and her family live in is clean but sparsely furnished and has no electricity or running water. There is also a hole in the ceiling, allowing the water and cold in. The household collects water every week from their relatives in Artashat.

The family took out a loan to help them survive in Artashat. They also have an outstanding loan from Nagorno-Karabakh that they took out when Mariam was expecting Nané, to pay for nursery. The bank has not been understanding of the family’s circumstances and has put pressure on them to repay the loans. 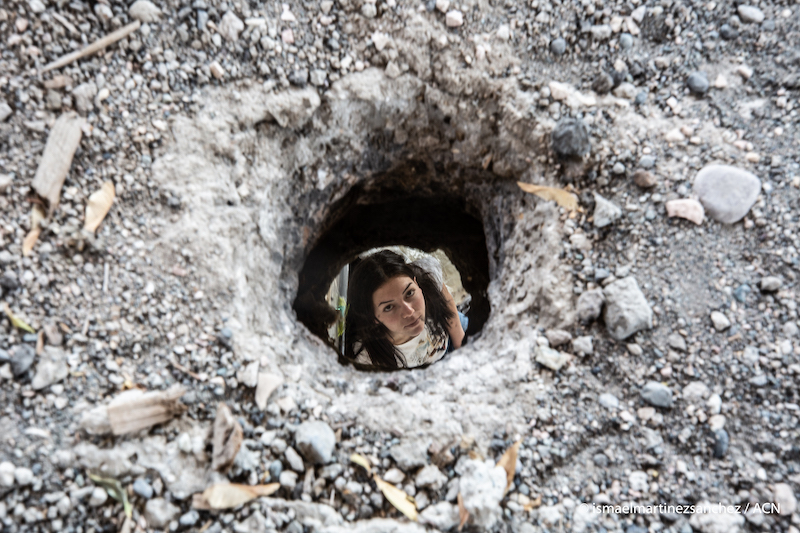 Mariam looking through the hole in the ceiling.

The family received 150 USD each month from the government for the first four months of their displacement. Families who lost a loved one in the conflict also receive a one-time lump sum payment of 20,000 USD.

Thankfully, Lida’s sons were not killed in the conflict. However, the older son is severely traumatized by what he experienced in the war and cannot work at the moment. Lida told us about how the family has tried to work to support themselves:

“My youngest son has at least been able to find work in the canning factory a little farther down the road. But the work is poorly paid, and he received his first wages only after six months. I am trying to help support the family by teaching two pupils.”

It was with great sadness that Lida talked about her home in Nagorno-Karabakh and how they are unable to return.

“They expect us to return to our houses – if they have not been destroyed. But it is not safe there. When in doubt, the so-called “Mirotvorcy” soldiers (the Russian “peacekeepers”) who are stationed at the border just look the other way. Azerbaijanis have occupied our house and boast about it on Facebook.”

Lida and her family have been forced to leave their home and now struggle in Armenia, traumatized and barely able to make ends meet. There are countless other refugee families in precisely the same situation in Armenia. The Catholic charities in Armenia have stepped forward to help provide for these refugees. 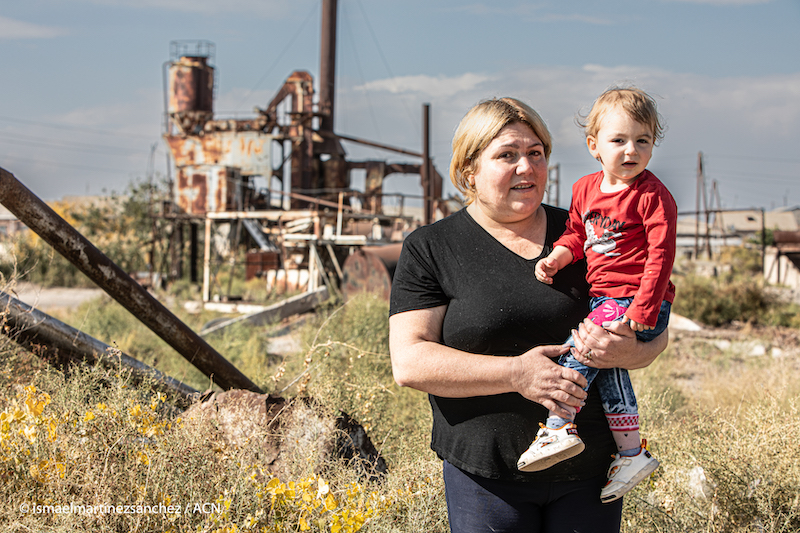 For example, help is provided to disabled veterans with accessibility to their homes and the installation of indoor bathrooms, so families won’t have to brave the freezing cold outside. For families who have lost their breadwinners, financial relief is provided and, when possible, help is given to those who can work to find employment.

ACN is supporting Catholic charities in Armenia by assuming the costs of an emergency aid package for 150 families living in the city of Goris, which is located close to the border of Nagorno-Karabakh in Syunik Province, for a period of 15 months. The package includes all of the elements mentioned above: housing and subsistence aid as well as psychological and pastoral care. This is just one example of the support ACN is providing to refugees around the world this winter. Please donate to help us in our work. 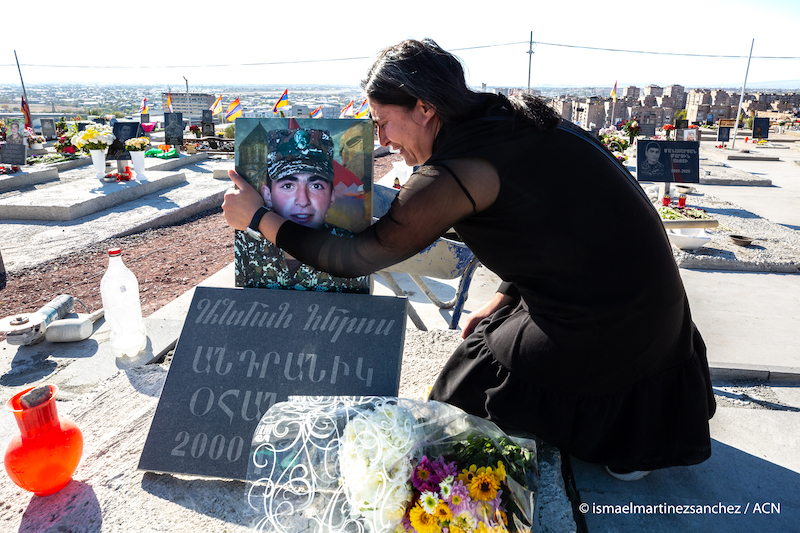 An Armenian mother at the grave of her 20-year-old son killed in the war.