Members of the North West Strategic Growth Partnership were delighted to return to a physical meeting this week to discuss the North West City Region’s strategic opportunities for economic growth and prosperity.

The Partnership meeting was held between senior Government officials from both the Irish Government and the Northern Ireland Executive and civic leaders and officials from Donegal County Council and Derry City and Strabane District Council.

The North West Strategic Growth Partnership is a unique partnership established in 2016 through the North South Ministerial Council that brings together senior Government officials from all Government Departments in the Republic of Ireland and Northern Ireland to meet with Donegal County Council and Derry City and Strabane District Council to deliver on the strategic priorities aimed at bringing real and positive change for the North West City Region.

Members attending the in-person meeting received detailed updates from senior officers from both Councils and Government Departments on economic growth and investment in the North West City Region together with key actions to date. Thematic discussions for 2023 were also considered with suggestions based on Strategic Priorities for the North West City Region including Tourism, Health and Further and Higher Education.

The meeting had a special focus on the North West City Region’s connectivity to the island in terms of roads, rail, and air infrastructure. Delegates attending the meeting also received an updated report on the implementation of the North West Development Fund.

Today’s meeting facilitated the launch of “Atlas for a City Region – Imagining the Post-Brexit Landscapes of the Irish Northwest” presented by Professor Gareth Doherty who was the lead researcher for this project and a native of Carndonagh in Co. Donegal. 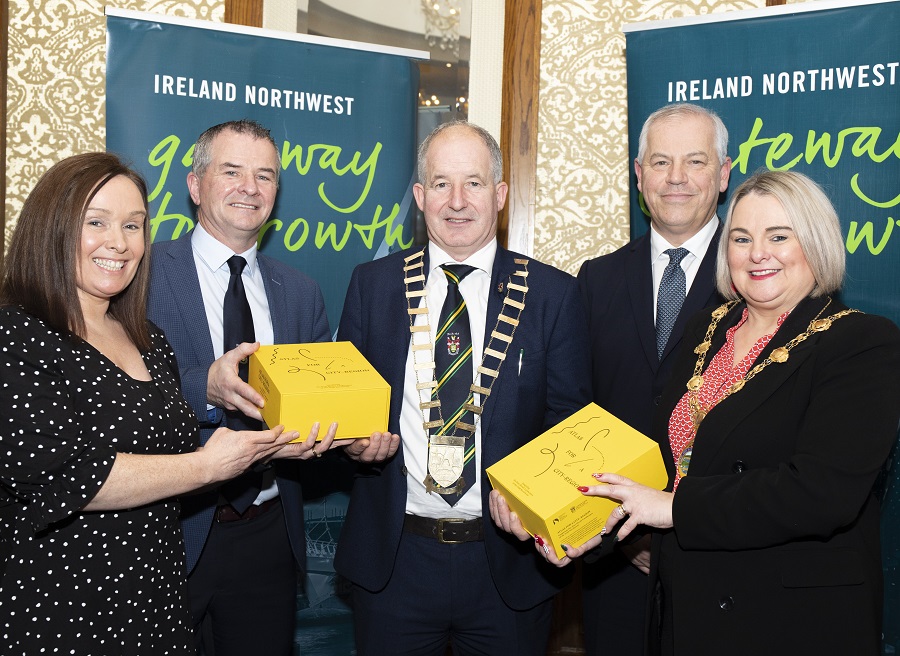 The project ‘Atlas for a City Region’ was jointly commissioned by both Donegal County Council and Derry City and Strabane District Council under the auspices of the North West Regional Development Group and has been borne out of the unique cross-border collaborative approach adopted by both Councils who are firmly of the view that despite Brexit, their region including Letterkenny, Derry and Strabane has the potential to continue to grow and prosper.
An Cathaoirleach of Donegal County Council, Cllr Liam Blaney speaking after the meeting said he was delighted to be in a position to welcome everyone back to a physical meeting of the Partnership noting that this was the 12th meeting of this important forum. In person meetings, he outlined, facilitated more effective communication, helps build on existing strong relationships and increases engagement, all key to the success of the Partnership.

Cllr Blaney welcomed all those who had travelled to our region outlining that it was hugely important to get an update on the progress on economic growth and strategic investment in the Region and have senior Government officials working in partnership to drive forward ambitious plans for the North West City Region.

He said: “The North West Strategic Growth Partnership is our Regional driver for cross-border co-operation and is a focused forum for place-based leadership. This partnership aims to inform Central Government investment to meet the growth needs of our beautiful Region – where the Causeway Coastal Route meets the Wild Atlantic Way. Now, more than ever, it is important that this Region continues to be a platform for multi-jurisdictional co-operation so we can become a net contributor to our respective economies”.

Cllr Blaney referring to the “Atlas for a City Region” commended the work done by Harvard GSD students under the guidance of Donegal native Professor Gareth Doherty, Director of the Landscape Architecture program at Harvard GSD.
He said “This has been an exciting project for us to embark upon and I must commend the quality of the work, the imaginative and innovative proposals that have been presented to us. This project has been about getting a fresh outside perspective on what the opportunities are for our region. We have ambitious plans for our region and despite the challenges we face, we believe that we have the confidence and resilience to allow our communities and businesses to continue to thrive and prosper.”
Mayor of Derry City and Strabane District Council, Sandra Duffy said it was hugely important for the partnership to meet and discuss progress on all priorities for the region and to continue to work collectively to drive forward ambitious plans for the region.

“Today’s meeting was very informative and interesting, it was great to meet everyone in person and receive updates from senior officials on economic growth and investment in the North West City Region together with key actions to date and to get a chance to have an input into the strategic priorities for the North West City Region including Tourism, Health and Further and Higher Education. I particularly welcome the focus that was placed on the North West City Region’s connectivity to the island in terms of roads, rail, and air infrastructure and the strong will that exists towards driving this forward.”

In relation to the Atlas for a City Region project, Mayor Duffy said she was impressed with the concepts and ideas presented by this project and how Harvard GSD’s students were able to develop a deeper insight into the lives that are lived in the region, the challenges that are faced, and most importantly the opportunities that exist.

Liam Ward, Deputy Chief Executive of Donegal County Council said this week’s meeting was hugely beneficial in further strengthening links between the two Councils, its partners, and the two Governments especially now when we can meet in-person again. He said; “By working together we can maximise the potential for delivery in strategic areas such as Tourism, Health and Education that will benefit the entire North West City Region. Collaboration is key to successfully developing a City Region that is thriving, sustainable and prosperous.”

Extending a sincere thanks to everyone who travelled and participated in today’s meeting, Chief Executive of Derry City and Strabane Donegal Council, John Kelpie said the partnership between the two Councils was very strong and key in aligning all strategic policies going forward. He said: “We share the same geography and the same challenges, and by working together we can deliver a positive and shared future.”