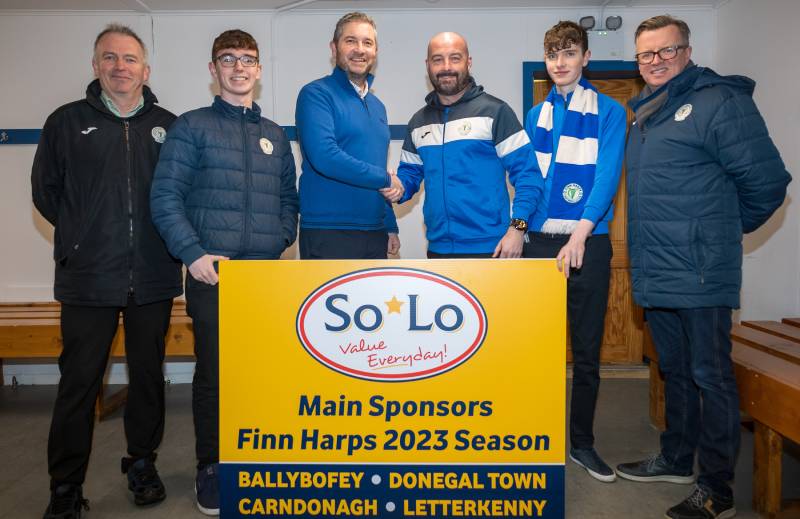 Finn Harps are delighted to announce that So-Lo Stores will be the club’s main sponsor for the 2023 season.

The So-Lo brand will be displayed on the soon to be launched new First Team Home and Away jerseys and across all official club platforms for the forthcoming campaign.

Finn Harps Commercial Manager Aidan Campbell says it is a huge boost for the Harps community to receive the backing of a local sponsor.

“We would like to welcome the Lavelle family and all the staff from So-Lo on board for the season ahead and I know all of our supporters and volunteers will be grateful for this tremendous show of support.

When we met with Connell and Chris their passion for Finn Harps was evident from the start and it’s fantastic to have a Donegal business as our main commercial partner.”

So-Lo stores is a family business that has been providing branded goods at low prices for over 25 years across their stores in Ballybofey, Carndonagh, Donegal Town and Letterkenny.

In addition to a traditional sponsorship agreement, Harps and So-Lo are also exploring ideas for further joint projects.

“We are lucky to receive tremendous loyalty every year from the North-West business community so it’s great news for everyone associated with the club to have one of our local, Donegal, family-owned companies on the front of our jerseys for what I’m sure will be an exciting season.

“On behalf of everyone at Finn Park I would like to thank Connell and family for their backing and we will do all in our power to make sure the partnership is a successful venture for all concerned.”

Connell Lavelle of So-Lo feels it’s the right time for the company to make the commitment.

“We as a family have enjoyed some great times as supporters of Finn Harps in the past. We are confident that with the new energy and enthusiasm that Dave brings to the club, there will be many more great days ahead and we are excited to be able to be a part of it.”