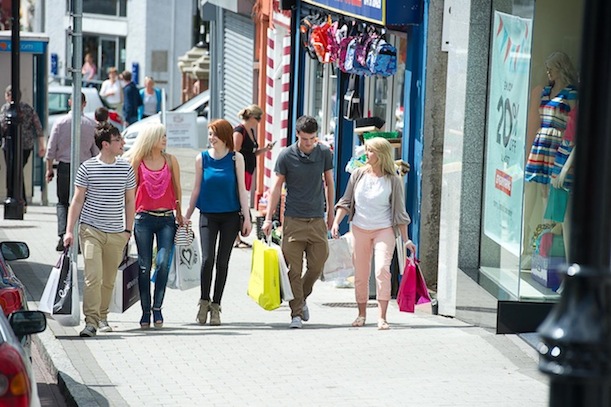 DONEGAL is reaping the double benefits of the weak euro thanks to an advertising campaign, a leading businessman said today.

The ShopLK campaign on UTV, on billboards in Derry and online at donegaldaily.com is pushing sterling business up by more than 300 per cent, says one businessman.

It is also keeping Donegal shoppers in the county as northern prices become too expensive.

John Watson, the owner of WatsonHire and president of the Letterkenny Chamber of Commerce even managed to get that story across….on UTV!

“These last three months the town has opened six or seven new businesses,” he explained.

“We’re reaping the benefits now of the exchange rate.”

Leonard Watson told the station: “Letterkenny at the moment is doing a €1.25 for the pound and they have found a great difference. I was chatting to a businessman yesterday and he said his sterling business is up 300%.

“For a couple of years there was a lot of people crossing the border but they’re staying at home now.”

The weak euro is good news for the many people here who work in the North, seeing their take-home pay rise by up to 15% over the past year.

It’s not so good news however for exports – making them more expensive in the sterling area.