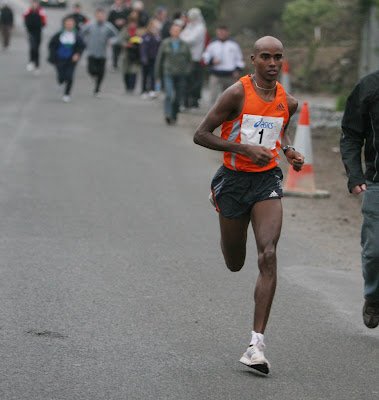 FROM THE FINN VALLEY AC 5K TO OLYMPIC GLORY FOR MO FARAH!

DONEGAL athletics fans are celebrating this weekend after one of its adopted sons won Gold at the London Olympics.

So when he went for gold FVAC members were right behind him.

As were the people of Milford.

Mo spent Christmas in Donegal with the Simms family a couple of years ago.

Farah, who was joined on his lap of honour by wife Tania and daughter Rihanna, said afterwards: “I just can’t believe it, the crowd got so much behind me and was getting louder and louder.

“I’ve never experienced anything like this – it will never get any better than this, this is the best moment of my life.

“It doesn’t come round often and to have it right on the doorstep and the amount of people supporting you and shouting out your name.”

Farah, who moved to London from Somalia with his family when he was eight, ran a near-perfect race to cross the line in 27 minutes 30.42 seconds, with his training partner Galen Rupp (USA) in silver and Ethiopia’s Tariku Bekele in bronze.

All eyes now turn to another athlete managed by Simms – someone called Usain Bolt.

FROM THE FINN VALLEY AC 5K TO OLYMPIC GLORY FOR MO FARAH! was last modified: August 5th, 2012 by admin