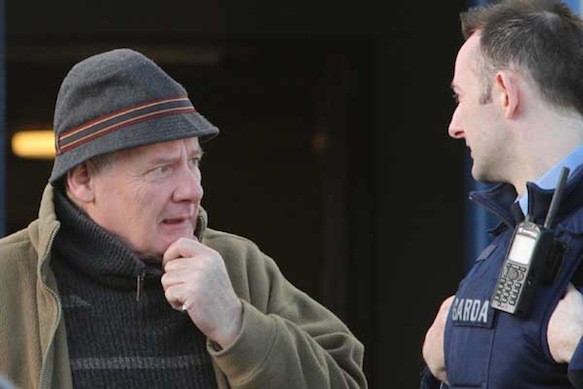 JUDGE WARNS DONEGAL-BASED STAR HE NEEDS HELP FOR HIS ALCOHOLISM

Actor Gerard McSorley has been arrested and has appeared in court in Donegal today charged with a disturbance outside a B&B in Dublin.

The Donegal-based star was fined €200 and warned to get treatment for his alcohol problems following the incident.

The 63 year old star of many films including Veronica Guerin, Angela’s Ashes and Warhorse, appeared at Letterkenny District Court on foot of a bench warrant.

McSorley was arrested by arrangement and brought before Judge Paul Kelly.

The charge related to a disturbance outside a Bed and Breakfast on St Stephen’s Green at 2am on November 6th last.

The actor had been given station bail but failed to appear before Judge Hugh O’Donnell on November 28th and a bench warrant was issued for his arrest.

Garda Rory Harrison, who arrested McSorley at his home at 1 Cul Na Toinne, Magheraclogher, Bunbeg gave details of the incident.

He said Gardai had approached McSorley on the steps of a Bed and Breakfast following complaints that he was causing a disturbance.

They warned him to stop but he continued to make desist and cause a disturbance and was eventually arrested under the Public Order Act.

The actor appeared in court wearing jeans, a striped jumper and a fleece.

He told the court that he did not have a solicitor but that he was pleading guilty to the charge.

The court was told that McSorley, who is originally from Omagh in Co Tyrone, had a number of previous convictions for being drunk and disorderly and using threatening and abusive language.

In 2001 at Kilmainham District Court, he was charged with impersonating a member of An Garda Siochana for which he was fined €50 and was also fined €200 for drink-driving on the same occasion.

Judge Paul Kelly asked McSorley what he was doing to address his problems.

The actor, who sat at the back of the court, stood up and spoke in a quiet voice.

He told Judge Kelly that he had been receiving medical help for his condition.

“I am doing everything I can to remedy this. I have spent the last five weeks in a psychiatric unit. I was released two weeks ago and I am under the care of doctors.

“I’m going to AA meetings and I apologise to anybody I have hurt. This isn’t in my character to behave badly but with alcohol I have made mistakes.”

Judge Kelly said the problem seems to stem from alcohol and those problems would continue unless he addressed them.

“I am doing that now,” responded McSorley.

The judge then warned him that if he accumulated similar convictions the courts would have no choice but to deal with him in a severe way.

“On this occasion I will deal with it with a fine. Get your act together,” warned Judge Kelly.

He was fined €200 and was escorted back to his address in a Garda patrol car.

He is due before the local courts again in June charged with careless driving.