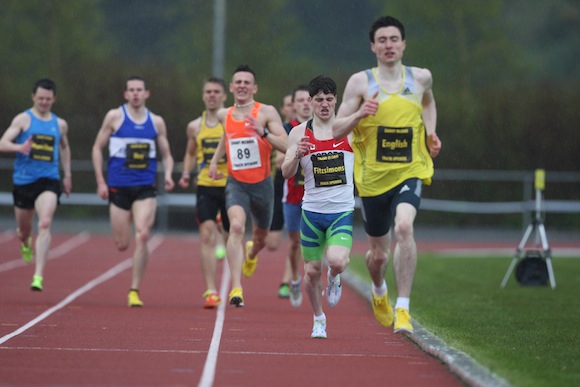 Mark English will complete in Sunday’s international race meeting in Letterkenny on Sunday.

Ireland’s hottest athletics talent will be on show against some of the world’s best athletes next Sunday 13th July at the Letterkenny AC Sub 4 Minute Mile Challenge Event.

One of the main talents on show will be Letterkenny’s own world class performer Mark English, who will line up in the Letterkenny Credit Union Mens 400m.

English has been in scintillating form at various meetings all over the world in the past few weeks, with a 2nd place at the Diamond League Grand Prix over 800m in New York, finishing just behind World and Olympic champion David Rudisha.

Added to this, he took victory at the European Team championships 800m in Estonia, and on Tuesday night had a big victory over 800m in Lignano, Italy. English’s busy schedule will take him to the Morton Games over 800m in Dublin on Friday, and he will toe the line over 400m in Letterkenny on Sunday.

Having run 46.56 for 400m for victory at the Belfast International last week, it will be interesting to see how much faster Mark can go over 400m in the Letterkenny race as he fine tunes his preparations for the European Athletics Championships in Zurich in August.

The 400m race in Letterkenny will also feature Trinidad and Tobago’s Machel Cedenio and Kenya’s Carvin Nkanata. Cedenio ran 45.23 seconds for 400m last month in the Cayman Islands Invitational, and he was a 4th placer at the 2011 World Youth Championships.

Nkanata competed for Kenya in the 4 x 200m in the IAAF World Relay championships, is the Kenyan record holder for 200m, and will be heading for the Commonwealth Games in Glasgow at the end of the month. Nkanata will also double up in the Donnelly Foley Mens 100m and will go up against USA’s Philip Redrick with a personal best of 10.18. Shercock’s Craig Lynch will lead the Irish sprinters, himself doubling up in the 100m and 400m. Two North-West athletes just recently selected for the World Junior Championships in Oregon, Tirchonaill’s Karl Griffin and Sligo’s Zak Irwin will also compete in the 400m and 100m respectively.

The Arena 7 Mens Mile is set to feature seven sub 4 minute milers in a world class field, along with seven other athletes who are all within one second of breaking the magical four minute barrier. Mexico’s double Olympic finalist Juan Luis Barrios, New Zealand’s Hamish Carson, Belgium’s Ali Hamdi, and Kenya’s Vincent Mutai are taking on the might of America’s best milers in Tommy Schmitz, Matt Elliott, Eric Finan, Jon Peterson and Kyle Merber who won the Cork City Sports Mile on Tuesday in a time of 3:56.

Commonwealth Games bound and another one of Letterkenny’s middle distance stars, Danny Mooney will be hoping to cause an upset and steal a victory in front of his home crowd, and in the process dip under the 4 minute barrier, and record the first sub 4 minute mile on Donegal soil. It is interesting to note that less people have run a sub 4 minute mile than have climbed Mount Everest so it gives an idea of how remarkable this feat is.

The Voodoo Lounge Womens 800m is loaded with Commonwealth Games stars heading for Glasgow, and it will be interesting to see if any athlete can get close to breaking 2 minutes for the two lap distance. New Zealand’s Nikki Hamblin is a double Commonwealth Games silver medallist and has a personal best of 1:59. Northern Ireland’s Katie Kirk, the Scottish duo of Emily Dudgeon and Hannah Tarver, USA’s Emily Lipari, Canada’s Celia Peters, and Ireland’s Ciara Everard will all be chasing fast times and will make a very exciting race of it.

In the Hickey, Clarke & Langan Mixed 3000m, Lifford’s Anne-Marie McGlynn will be going up against American’s Clerc Simpson and Addie Bracy. McGlynn has been having a wonderful season so far with representing Ireland at the European Team championships in Tallin, Estonia last month, and will be looking to lower her personal best even further, and the Americans will no doubt push her on. The Mens field will include Kenya’s Freddy Stuk, winner of this year’s Belfast Marathon.

Multi-event Irish superstar Kelly Proper, who has been smashing records in many events, will be doubling up in the 200m and Long Jump. In the Glencar Spar 200m, Proper will be aiming for a European Championship qualifying time, which she only narrowly missed out on last week by three hundredths of a second in running 23.37. Proper will be aiming for a second victory of the day in the Donegal Daily/County Seat Womens Long Jump which she won at last year’s event with a jump of 6.03m. The Four Lanterns Mens Javelin is set to feature the best of the Irish throwers, with Strabane’s Aaron Crawford and North Down’s Matthew Martin doing battle, both with personal bests of over 60 metres.

European Junior Champion Patrick Zwicker from Germany will be the athlete to beat in the Tobin’s Mens 800m. Zwicker took the title in Rieti, and he will also be joined on the startline by fellow German athlete, Patrick Schoenball. Kenya’s Reuben Bett has a personal best of 1:44.79, will ensure that this will be a race not to be missed, along with several Irish athletes who will be looking to post fast times, including Letterkenny’s own Ruairi Finnegan. The opening ceremony for the event will take place at 1:45pm, with all the international action kicking off at 2:00pm at the Danny McDaid Athletics Track at the Aura Leisure Centre. With such a high calibre of athletes competing from all over the World, it is a great opportunity to come and see world class athletics, and hopefully the first sub 4 minute mile to be run in Donegal.

IN-FORM ENGLISH CONFIRMS HE WILL BE AT TOP ATHLETICS MEET IN LETTERKENNY was last modified: July 10th, 2014 by Stephen Maguire