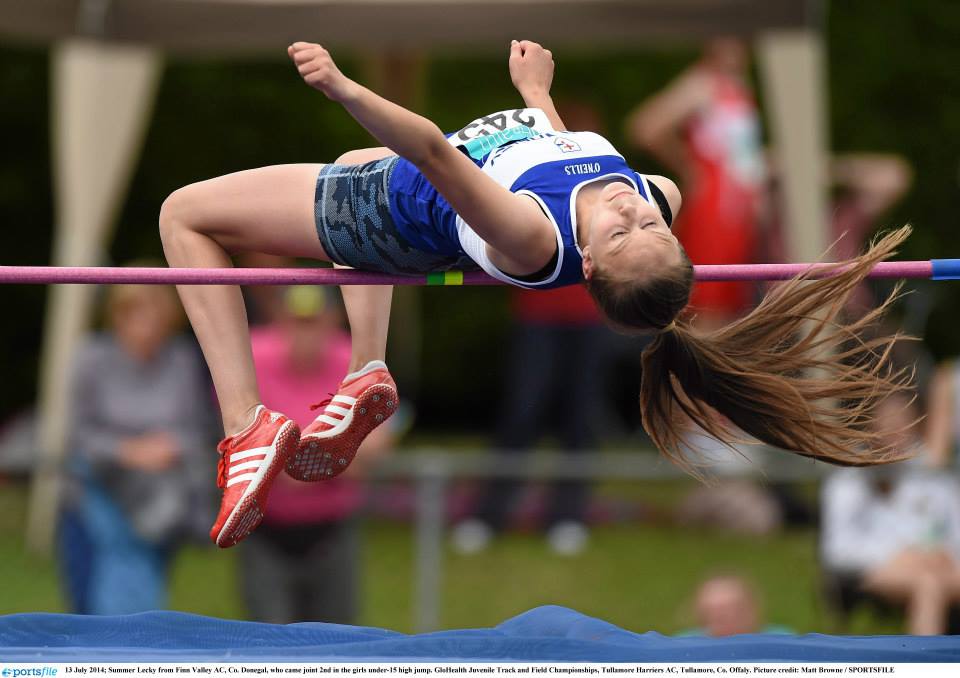 Well once again the weather conditions were good and Finn Valley ac were primed and ready to mix it with the best in the country.

James Kelly produced a throw of 51.67m for Gold and a new Championship Record in the u-15 Boys Javelin, and a 37.72m effort in the Discus for Bronze, Older brother John threw 42.27m (pb) to easily win the u-19 Boys Discus. Both boys coached by dad John Kelly snr still have their specialist event the Shot Putt in 2 weeks time and more Championship Records could fall.

Sommer Lecky recorded a leap of 5.48m (pb) to win the u-15 Girls Long Jump and a few hours later added a Silver in the High Jump 1.60m, such is the high standard that she sets herself she left the stadium a little disappointed but any day you can walk away with 2 Irish Championship medals is a good day and she should be very proud on the year she has had as should coach Niall Wilkinson and the Lecky Family.

Dylan Kearns was in a high class Javelin competition with Strabane Ac’s Gareth Crawford and in the end only 14cm separated these 2 fine throwers. Dylan produced a pb of 45.92m to win the Silver medal in the u-16 Boys cheered on by Mary and Bernie O Callaghan who have done so much work with Dylan over the years.

Ian Brennan again produced a pb of 12.94m to win the Silver medal in the u-18 Boys Triple Jump to the delight of his family and coach Adrian Lecky. This young man has continued to improve throughout the year and 13m+ is just around the corner.

Naoimh Mc Granaghan produced another pb in the Javelin to break the 30m mark for the first time with the 500g implement to win a Bronze medal in the u-16 Girls. With her favourite event the Hammer in 2 weeks time as well as the Shot she could add to her medal tally.

Cate Smyth who fell in the final of the 60m Hurdles indoor champs when in contention for a medal proved that with grit, determination and training you can achieve your goals. Input from Shaun Carlin in technical issues has helped her enormously. Cate ran a pb of 10.15secs for a Bronze medal in the u-13 Girls 60m Hurdles roared on by her proud Dad & Mum & friends.

Near Misses and Bad Luck.

As in life a little rain must fall and we had a few near misses and some bad luck.

Janine Boyle had the misfortune to suffer a disqualification to what could best be described as ultra sensitive starting blocks in the u-16 Girls 100m event, she was one of many to suffer this and questions have been asked.

Aine Kerr suffered a suspected broken toe during her u-14 Girls Long Jump event but despite this injury competed and narrowly missed out on a bronze medal.

Others who performed well were

3 Gold, 3 Silver and 3 Bronze, 1 Championship record and many pb’s and good start to the individual events but still another weekend in 2 weeks time to try and improve on our tally from last year and push to claim the title of Best Juvenile Track & Field Club in Ireland.

Many thanks to all who travelled down to Tullamore over the weekend, to the athletes who performed so well and not forgetting the coaches who also give up their spare time to pass on their knowledge and experience unto our young talented bunch of athletes.