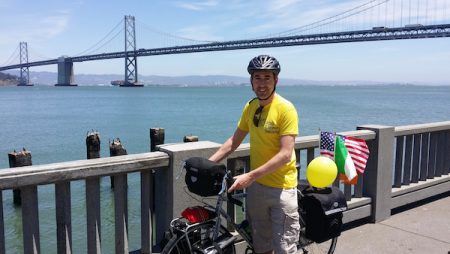 Last year he cycled across America and now he’s back!

Roger Holmes has more energy than a box of Duracell batteries and he will need of all of it if he is to complete his latest challenge.

Here is the Letterkenny man’s latest challenge – in his own words!

For my 2017 adventure challenge, I am going to do the ‘Lowest to Highest’ – a 135 mile hike with 14,787 feet of climbing over three mountain ridges, from Badwater in Death Valley to Mount Whitney, California.

Badwater, at 282 feet below sea-level, is the lowest point in North America. It is also just a few miles from where the world’s highest ever temperature was recorded (134f). Mount Whitney rises to 14,505 feet, making it the highest peak in the contiguous United States. (The USA, excluding Hawaii and Alaska).

Trans-Atlantic Cycle was very much about distance and endurance, and although I went through some very remote places, I was never too far from people/traffic/help. L2H offers a very different challenge. It is a solo test in the wilderness. The biggest challenges are self-motivation, sourcing water, dealing with the elements and steering clear of the more dangerous wildlife.

Unless something crops up, I won’t be fundraising this time as it took up a lot of time and energy on Trans Atlantic Cycle. I will however continue to raise awareness of the PSA test.
Trans Atlantic Cycle raised just over six thousand dollars, but up to fifty men in or around my age got in touch to say that they were inspired to ask their doctor about a PSA test. That was the most rewarding aspect.

This all started out when a bad fall from a bicycle left me in a low place. Ive been turning that negative experience into positive outcomes ever since. I loved the adventure and sense of personal achievement on Trans Atlantic Cycle, and have been inspired to seek out new challenges ever since.

I am doing L2H this year as it will be fairly short and cheap and that suits me right now. It does however offer enough of a challenge to test myself and push my boundaries regarding solo-exploring and adventuring; which is something I hope to build on year on year. I already know what my ultimate goal is, and this is another step along the way.

Having to completely rely on yourself in the wilderness motivates you to know and trust yourself on a whole new level. In August 2014 I was left with a bad situation. Nobody but myself could have gotten me out of it. That taught me a valuable lesson: You simply have to look out for your own best interests or you will suffer. On L2H there will be no sherpas, no guides, no motivators and no fellow climbers/hikers to rely on. You have to take responsibility for your own wellbeing, be it physical or mental. That is the message I would like to carry on L2H. Bring it on!