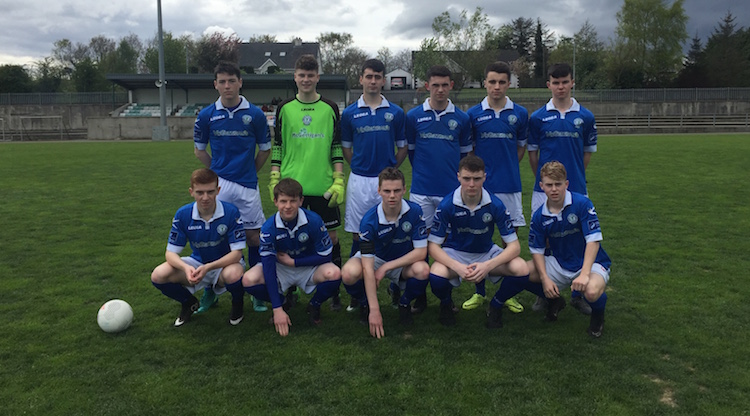 Finn Harps Under-17s grabbed their third win in a row as three second-half goals put Monaghan/Cavan to the sword at the New Camp Complex this afternoon.

James Carolan, Ryan Cunningham and Jamie Brown netted as Declan Boyle’s team followed up their wins over Longford and Sligo by claiming the points, and their third successive clean sheet.

Harps found the Monaghan/Cavan side a tough nut to crack, though they always seemed in control of the tie.

Once Carolan broke the deadlock early in the second half, there was only going to be one winner.

Carolan saw a second-half penalty smash against the crossbar, while the former Bonagee striker also had an effort in the opening minute fall down off the underside of the bar and actually appeared to cross the line.

Harps are light on numbers with an injury crisis all through the club these days.

Boyle, who already has Liam McFadden and Michael Gallagher out long-term, couldn’t believe his eyes when midfielder Jack O’Donnell reported for duty on crutches today, falling a fall last night at home.

The Killea man is said to be suffering ligament damage and faces a spell on the sidelines.

Boyle had only two subs, but his team started well and Carolan was unfortunate to see his early attempt chalked off.

Brown was heavily involved throughout and headed wide from a cross by Marc Walsh before a diving header by Brown flew wide after he was picked out by a delicious delivery from Cunningham.

Carolan curled wide and had another shot that flew just over as Harps upped the ante.

When Carolan dipped in a dangerous free late in the half, centre-back Keenan Diver, who ghosted in at the far post, saw his cross-goal header saved by Monaghan/Cavan goalkeeper Daniel Murdoch.

Scoreless at the break, Harps laid down the marker when Carolan, after getting onto the end of a long ball in from the right, fired home to open the scoring.

Monaghan/Cavan were still reeling from that concession when Harps made it two-nil, Cunningham rolling past Murdoch with a clinical finish.

Harps might have made it three, but Carolan blasted a powerful spot kick against the crossbar.

Harps’ players have set themselves a target of ten clean sheets and they managed their third of the campaign here. They almost gifted Monaghan/Cavan a goal, though, as a poor kick-out by Joe Boyle invited a shot from Oisin Brady, but his drive was well wide.

Harps copper-fastened the win when Brown latched onto a through ball from sub Niall McGinley and, after seeing his first effort saved by Murdoch, he glided a second into the net to seal the deal.

Harps will see Corrie-Lee Bogan and Daragh Ellison return to action during the week and it’s a big week for the Harps lads as they host Derry City in the Cup on Wednesday and Dundalk at the weekend in the League.