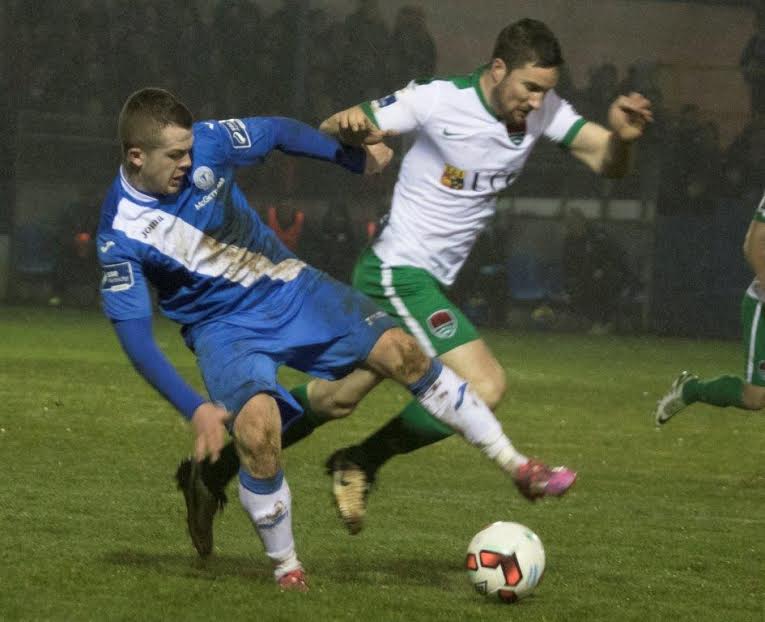 Mid-term report: Can Finn Harps beat the drop in the mother of all relegation battles?

It perhaps says a lot about Paul Hegarty’s ambitions for Finn Harps that the assistant manager described himself as ‘slightly disappointed’ with the club’s positioning at the mid-season break.

After a scoreless draw in Sligo on Friday night, Harps headed for the sun sitting in eighth place in the table.

Just nine points separate Limerick FC, in sixth place, from Galway United, the bottom club, and the race for survival – made all the more intense by the fact that three teams will make an automatic drop to the First Division – will be much more intriguing than Cork’s relentless march to the title.

That particular prize could already be handed to Johnny Dunleavy, the Cork City captain, but what of Dunleavy’s home club’s hopes of survival?

“We don’t want to drift away”

Harps’ big aim, once the reformatted League was announced, was to stay in touch in what looks like being the mother of all relegation scraps. When Ollie Horgan, the Harps manager, learned of the decision to relegate three teams he must’ve felt like the rug had been pulled from under him, but 18 points from 17 games and a placing of eighth certainly represents a satisfactory report card for now.

“The thing we don’t want is to drift away early,” Horgan said at a press briefing in the Clanree Hotel on the eve of the new season in February.

“If we can stay in it, stay competitive with three teams above us and be in with a shot, we’d view that as a success. People make predictions about who’ll go down. it seems to be just a question of who’ll go down with us.” 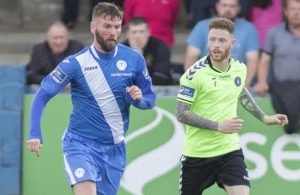 He was right. Paddy Power, for instance, installed Harps as 1/4 favourites to make the drop. None of the national correspondents predicted Harps to survive the cull: A new poll now at this stage would make for interesting reading.

Harps have conceded 32 goals, more than any other team in the Division. Bray, who are fourth, have shipped a surprising 31, while bottom-of-the-pile Galway have conceded just 24.

At the other end, Harps have scored 20 goals. A modest enough tally, yes, but it’s more than Bohemians, Drogheda, Sligo, St Pat’s and Galway; all of their relegation rivals.

In the whole of last season, when Harps finished third-from-bottom – then good enough to retain Premier Division status – they scored 23 goals and conceded 49.

Friday’s clean sheet in Sligo was just their second of the season and they have let in some poor goals; certainly not some that bear the hallmarks of the robust defence that Harps have been known to have under Horgan’s watch.

The loss of Keith Cowan, following a horror knee and leg injury sustained against Pat’s last season that will keep him sidelined for the duration of this campaign, is perhaps only now being truly felt.

Cowan’s presence is definitely a miss, as is that of Richard Brush, who pushed Ciaran Gallagher hard for the number 1 jersey last season, when Horgan regularly rotated his goalkeepers.

Harps have been better away from Finn Park than they have been in some time. Last year, a 2-0 win at Longford Town in June was their sole victory away from home and they picked up just nine points on the road. This year, already, Harps have claimed eight away points, including wins at St Patrick’s Athletic and Derry City (a 2-0 win at Maginn Park being their first ever away win against Derry in League football). 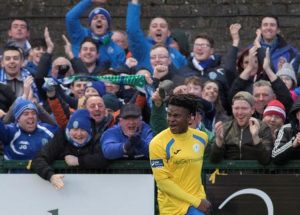 BJ Banda after scoring against Derry City at Maginn Park

Against Pat’s at Richmond Park, Harps came from behind early on to win 2-1, with Sean Houston and Ciaran O’Connor getting the goals.

Quality and stubbornness will be exactly what he’ll be looking to now in their survival battle.

O’Connor is on loan from Dundalk until the end of June and has weighted in with five goals so far, although it seems certain that the striker will be making his way back to Oriel Park for the second half of the season. Danny Morrissey, a surprise signing from Cork City in the winter, has scored three times, while Houston has netted four (including one in the Cup).

Injuries hit Harps hard and for a period Horgan was unable to even fill the substitutes’ bench for some games, such was the volume of injuries.

Their battling qualities cannot be questioned and they were unfortunate to be pipped 3-2 by Shamrock Rovers in Tallaght back in March, when they’d come from two down only for a late Simon Madden goal to undo their fine comeback.

“Moral victories are no good to us,”

“Moral victories are no good to us,” Horgan cautioned that night in Dublin and it was a tone that struck a chord around Navenny Street, where a ‘unify and defy’ campaign was launched at the start of the season. Defying those odds is the sole objective for Harps this season and it will be necessary for Horgan to add to his ranks in July.

Thomas McMonagle left during the season and Friday night’s was Michael Funston’s last game in a Harps shirt, with both men having become frustrated at the limited game time they’d been receiving.

Two bodies from an already small squad represents a big loss and Horgan will look to recruit when the shutters go up in the transfer window.

Horgan has been reluctant to give youth its head, save for when he has to deploy the younger members of his ranks. Simon McGlynn has shown promise, but has been restricted to just five appearances as a substitute in the League and, at the risk of being harsh, the prospects of the Raphoe teenager being given a chance seem remote, at best.

The likes of Gareth Doherty, Keelan McDermott, Dylan McCrory and Ciaran Kelly have been knocking on the door, but haven’t managed to get their feet across the threshold yet.

BJ Banda did make a big impact against Derry, scoring one and setting up the other, but injury has curbed his involvement of late.

“It’s possibly what we can afford”

“We need to try and get in a few players in July,” Hegarty said at the weekend and it seems that experience will be one of the key traits on the resumé of any prospective signings in July.

“We’re a bit light, but it’s possibly what we can afford,” Horgan said before the start of the season. “We can’t afford a big panel. I’d like to get a couple more in.”

Wages-wise, Horgan’s Harps are punching way above their weight.

Harps have a weekly wage bill of just over €5,000, which is well beneath the outgoings of any of their Premier Division peers. They don’t have a major financial backer or substantial investors, save for the club’s main sponsors, McGettigan’s.

It is why the attendances at Finn Park have become such a worry for the club. Only 380 people turned up for the 3-1 win over St Patrick’s Athletic and while that number did swell to 1,288 for the 3-2 win over Limerick four nights later. that figure is just about breakeven point.

From now until the end of July, Harps have just three home games – and they really do need the north west public to give their backing, while something in the way of a major fundraiser would do no harm, either.

Harps have already visited the basement position this season, falling to the floor after a 3-0 home loss to Bray but the accumulation of seven points from their last three games has raised hope again. 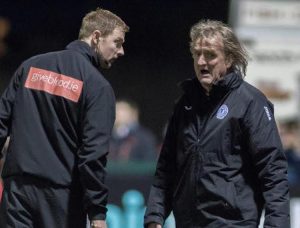 Harps came back after the break last season to record wins over Longford (2-0) and Galway (1-0), but then went on a ten-game winless streak before defeating Bray in Ballybofey to steady the ship that was wobbling, by then, perilously close to the rocks.

To stay out of the quicksand this year, Harps cannot afford a similar bad patch.

As peculiar as it sounds, but the bean counters at Finn Park would probably prefer the race to go to the wire, given that it would keep the casual observers placing their €12 into the tin every fortnight.

Supporters would take that scenario, too, although Hegarty and his ilk have hopes of Harps not being left clinging to their top flight status.

That being said, Horgan said after a 2-0 loss to Drogheda in April: “I think we’d be where we hoped to be. Our ambition was to stay in this Division with a fight. Our ambition is to be going into the last game of the season having something to fight for and not be drift away at the bottom.”

Stephen Kenny, the Dundalk manager, said after his side won in Ballybofey that Harps’ ‘spirit’ would keep them up.

The additions of O’Connor and Morrissey were more-than-useful acquisitions, though both were sidelined for a period. Caolan McAleer from Omagh has been excellent so far and the obvious class of Paddy McCourt has been evident, since the former Celtic and Northern Ireland player was taken in on the week the new season began.

McCourt’s capture was the bluechip signing of Horgan’s pre-season business. Even through injury, McCourt has been to the fore for Harps so far and there have been more than fleeting flashes of his brilliance.

“Paddy will add to it with his quality, but he is here because he wants to be here,” Horgan has said. “He knows how we work and he knows that it is about us staying in the Premier Division.”

It’s so far, so good – but the road ahead remains littered with potential potholes.