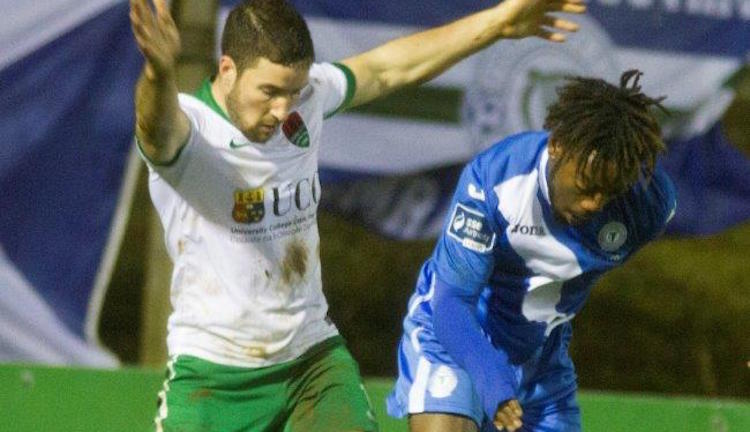 Eddie Dsane and Danny Morrissey gave Finn Harps a vital win in a relegation six-pointer against Drogheda United at United Park this evening.

With Galway United winning 3-1 against Limerick tonight, it made the win all the more important for Ollie Horgan’s Harps, who are in eighth spot, but just two points out of the relegation zone after securing this vital win and keeping just a third clean sheet of the year in the process.

Harps took the lead after just four minutes when Dsane stepped up to curl a delightful free-kick past the helpless Stephen McGuinness in the Drogheda goal.

It was certainly a fine way for Dsane to bag his first Harps goal as a delicious strike curled to the net.

Harps included new signing Thomas McBride among their subs, the midfielder from Derry making a return to the club he lined out for in 2012 and 2013 while Horgan is awaiting international clearance to enable French-born striker Ibrahim Keita take his place in the squad.

Drogheda haven’t won since a 2-0 success against Harps in Ballybofey in April and had scored just once in their last eight outings before this.

They almost hit back four minutes later, but Thomas Byrne saw a superb 30-yard strike cannon off the Harps crossbar.

Dsane made his return to the starting team along with centre-back Packie Mailey in the two switched made by Horgan from the side that had lost 4-0 to Dundalk a fortnight ago.

Gareth Harkin and Johnny Bonner were the men to make way and within four minutes Dsane had repaid Horgan’s faith with a glorious opener.

Drogheda have seen Killian Brennan and Marc Griffin their relegation-threatened squad lately and Pete Mahon’s side were in desperate need of something against their fellow strugglers.

A raft of changes on the Drogs side saw Lloyd Buckley, Kevin Farragher, Sean Thornton, Jake Hyland and Thomas Byrne all given starting berths, although Farragher’s evening lasted little more than 23 minutes before he was replaced.

Caolan McAleer tested McGuinness, who gathered well after Ciaran Coll made the chance. Soon after, McAleer was gifted the ball by Drogs’ sub Ciaran McGuigan, but the Harps winger was denied by McGuinness when he might’ve done better.

On the stroke of half-time, Sean Thornton lined up a free-kick right on the edge of the Harps box, but his effort was always rising.

McGuinness thwarted the lively McAleer again ten minutes into the second half while Lloyd Buckly and Luke Gallagher both headed over at the other end as Drogheda sought a way back into it.

But, 16 minutes from time, Harps added a second when Morrissey latched onto Sean Houston’s through ball before lifting over the advancing McGuinness.

McAleer almost made it three, but McGuinness saved with the tips of his fingers.