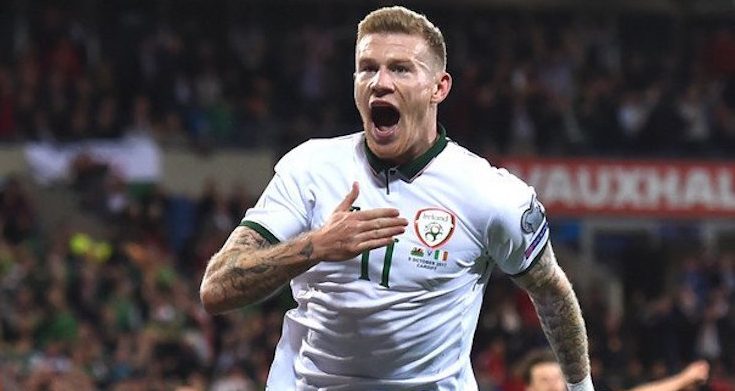 James McClean netted a memorable winner that will join the pantheon of the great Irish goals as the Republic of Ireland secured a place at next month’s World Cup play-offs.

McClean struck in the 57th minute to seal a 1-0 win over Wales in Cardiff.

The result means that Ireland finish as group runners-up behind Serbia and go into the hat next Wednesday when the draw for the play-offs will be made.

McClean was back from suspension and the Derryman came up with the magical moment twelve minutes into the second half.

Jeff Hendrick dispossessed Ashley Wiliams and his cross was wonderfully dummied by Harry Arter, leaving McClean with a shot at glory. He made no mistake with a wonderful finish.

That goal by McClean will now be cut and pasted in alongside those iconic images provided to us by Ray Houghton, Packie Bonner, Kevin Sheedy, Alan McLoughlin, Jason McAteer, Robbie Keane, Shane Long and Robbie Brady.

The traveling 3,500 Irish fans – including hoards from Donegal – erupted.

Shane Duffy – whose father Brian is from Letterkenny and whose mother Siobhan hails from Raphoe – was magnificent at the heart of the Irish defence. Duffy was named Man of the Match after a colossal display alongside Ciaran Clark, another man with strong Donegal connections.

Martin O’Neill had urged his men yesterday to get the win for injured Seamus Coleman – and Ireland delivered a heroic night in Cardiff.