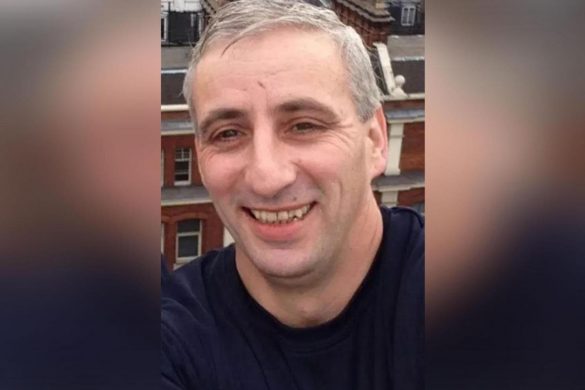 Two men have been caged for a total of 30 years for killing a Co Donegal man in London in broad daylight.

Damien McLaughlin, 42, originally from Manorcunningham, was stabbed to death in north London on April 22.

Yesterday, 18-year-old Eduardo Embalo, of Dowsett Road, London, was found guilty of manslaughter and possession of an offensive weapon. He was sentenced to 14 years behind bars.

And Andre Joseph, 25, was given 16 years for the same charges.

However, both were found not guilty of murder.

The Irish Sun reports how the court heard how McLaughlin desperately tried to fight back after he was chased and stabbed to death.

The 42-year-old was surrounded and knifed in the heart in front of shocked residents in Enfield, as our dramatic picture shows paramedics trying to save him.

Dozens of children were playing nearby and it’s believed some of them witnessed the horror attack.

Plumber McLaughlin – a father and grandfather who worked for Speedy Jet Drainage – was pronounced dead at the scene.

Embalo was handcuffed shortly afterwards as he spotted by police acting suspiciously near the murder scene.

Days later, Joseph was arrested at a nearby address.

CCTV, mobile phone footage and witness statements identified the pair as the attackers.

It is believed that slain McLaughlin was known to at least one of the attackers.

A third man Omar Warner, 18, of Marshside Close, London was found not guilty of murder, manslaughter or possession of an offensive weapon.

Jurors had been told the victim had been “in trouble with police for most of his life”.