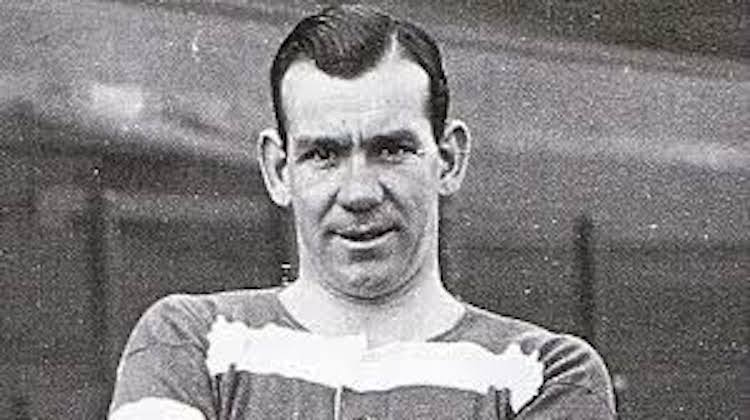 DID you know that Donegal was strongly connected with a Celtic legend and a man who holds the record for the most career goals in British football (a record unlikely to ever be surpassed)?

Well, one James Edward (Jimmy) McGrory is the man in question – and here’s how

McGrory’s exploits for Celtic during his storied career are the stuff of true legend. McGrory (26th April 1904 – 20th October 1982) was a Scottish born footballer who scored some 550 goals, the highest tally in British football history, during his career.

‘Heroes Are Forever’ by John Cairney, tells us of McGrory’s close family ties with this county.

“In the year before, George Green had married Ann Jane Bradley in Preston, Lancashire, an event that was also to have a future bearing on the McGrory story, but for the moment, the Northwest of England was a long way away from the Northwest of Ireland.”

This writer has found that Parish records of the time have been hard to track down, though it appears that Henry McGrory and Catherine Coll tied the knot at St Baithin’s Church in St Johnston (the building which still serves as the chapel in the village to this day).

The first McGrory child, Hugh, was born in 1890, and a year later the young couple and their newborn baby were forced to join the queue for the cattle boat that would take them to Glasgow.

James Edward McGrory was born the eighth child of Henry and Catherine McGrory on 26th April 1904 at Millburn Street, Glasgow. The family lived in Glasgow’s East End on Harry’s wages as a gasworks labourer.

When Jimmy was 16, he began playing for St Roch’s Juniors for £2 a week. The following year, in 1922, he joined Celtic, before going on loan to Clydebank for the 1923-24 season. Between 1922 and 1937 he scored 397 League goals for Celtic (as well as 13 when on loan at Clydebank). He played alongside other legends like John Thomson and Patsy Gallacher (who was born in Ramelton) under the tutelage of another legend, Willie Maley. 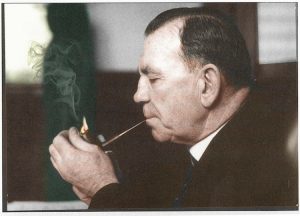 Jimmy McGrory during his time as the Celtic manager

McGrory had a deep affinity with County Donegal. It was said that the county was his favoured holiday destination. And in 1931, his connections with Donegal would deepen.

In the summer of 1931, McGrory kept a diary of a club trip to America (an unusual undertaking for a player of the time). His final entry into the diary, dated July 10th 1931 read: “The ship (the RMS Transylvania) arrived off Moville, County Donegal, Eire. I disembarked on the Custom’s Officer’s boat, and that morning, around 8.30am, I started on a life-long journey. I got married.”

His bride, Miss Veronica (Nona) Green had travelled from Glasgow a few days previous. The Daily Record reported: “The (Green) family were proprietors of 13 picture houses, including picture theatres in Europe. The Nuptial Mass, in St Michael’s Church, Moville, on Friday 10th July 1931, was celebrated by the Reverend J.A. Shields, Falcarragh. The best man was Mr A.T. Mullan, Glasgow, and the bridesmaid was Nona’s sister, Marion.”

So, the connection between Donegal and Jimmy McGrory was strengthened.

Despite his success on the field, Celtic had to wait a decade after 1926 before again winning the Scottish League Championship.

After leaving Celtic, he joined Kilmarnock as manager, before returning to manage Celtic in 1945. He held the manager’s position for nearly 20 years, before Jock Stein took over in 1965.

During his time in charge, Celtic recorded one of their most famous results, a 7-1 thrashing of arch rivals, Rangers, in the Scottish Cup final. To this day, it remains the greatest margin of victory in the history of British Cup finals.

* The Celtic manager, Brendan Rodgers, is special guest at a fundraising event in the Silver Tassie this Sunday evening, which will include a Q&A. The event is being hosted by the Donegal Celtic Supporters Club with proceeds going towards The Celtic Foundation.

Celtic will also have the SPL League Championship, SFA Cup and League Cup on view tomorrow, Saturday, at the Station House Hotel, Letterkenny between 6.30 and 8.30pm. Also on view will be a replica European Cup, which Celtic famously won in 1967.