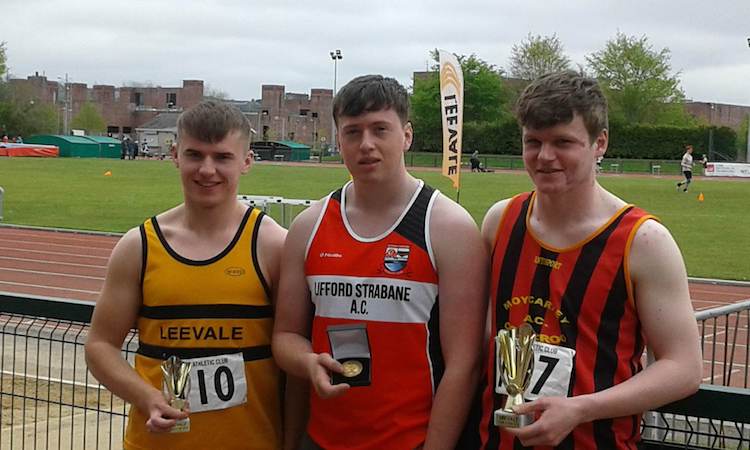 O’Donnell hit a European Junior qualification mark of 67.20m in the Men’s Hammer at the same venue in May 2017.

Brendan O’Donnell of Lifford Strabane AC (centre) wins the Mens Hammer at the Leevale Open Sports in Cork yesterday with a throw of 67.68m. Also pictured are Sean Mockler of Moycarkey Coolcroo AC (right) who was runner up and Padraig O’Callaghan of Leevale AC (left) who finished in 3rd.

After an opening salvo of 66.12m in Round 1, the Lifford Strabane AC athlete hit top form in Round 2 throwing a new personal best of 67.68m, a distance which was just 32cm off the qualification standard of 68m for the World Junior Athletics Championships to be held in Tampere, Finland in July.

The throw did however, earn the young St. Eunan’s College athlete the award of Thrower of the Meet and he was presented with the Brendan Coughlan Memorial Perpetual Trophy by members of the Coughlan family present. 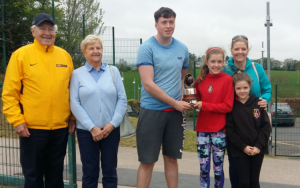 Brendan O’Donnell receiving the Brendan Coughlan Memorial Trophy for Thrower of the Meet at the Leevale Open Sports in Cork yesterday from members of the Coughlan family.

O’Donnell will sit his Leaving Certificate examinations in June but will have other opportunities to gain World Junior qualification over the coming weeks with Ulster and Irish Schools Championships on the horizon as well as two big throws meets in the German cities of Halle and Mannheim.

There were other Lifford Strabane AC hammer throwers in action at the weekend at the Tír Chonaill Ac Open Invitation Meet in Donegal Town on Sunday.

U15 athlete Adrienne Gallen had a new personal best of 45.69m when taking victory in the Girls U16 event while Ross Henderson also had a best ever throw of 45.55m when winning the Boys U16 event.

There were good performances too from the likes of Jude Mc Crossan and Cormac O’Donnell in the U16 Boys Hammer and from Áine Marie McBride in the U16 Girls while Olivia Cuskelly took top spot in the U18 Girls with both Diarmuid O’Donnell and Alisha Cuskelly victorious in the U14 Boys and U14 Girls respectively with Una O’Donnell taking runner up spot here. 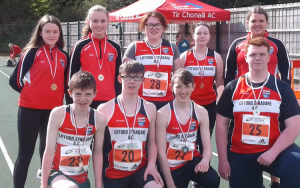