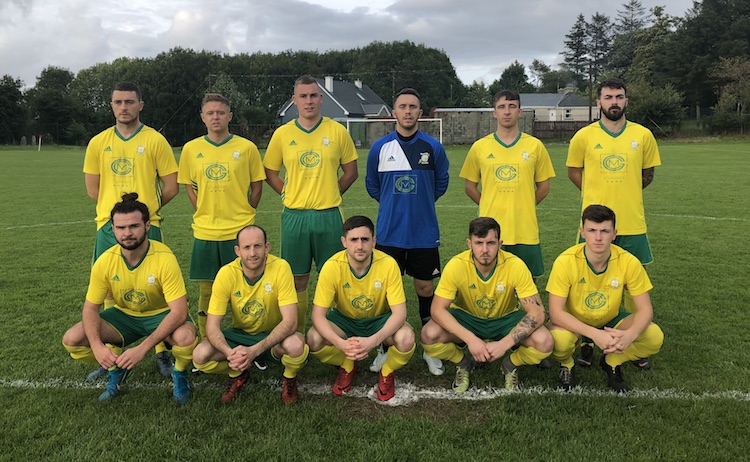 Not until Garbhan Grant tucked away an 84th minute penalty was this pulsating USL League Cup opener settled as Bonagee United wriggled clear of Swilly Rovers in an eight-goal thriller.

By Chris McNulty at Swilly Park

Grant found the bottom corner of Gareth Muldoon’s net after Aaron Wasson was upended by Ryan McDaid and it, finally, copper-fastened a win that ought to have been safe when Bonagee led 4-1 on the hour.

After scoring three times – through Micheál Doherty, Grant and Deano Larkin – in the first 14 minutes of the second half, Bonagee looked home and hosed, but Swilly had other ideas.

Goals by Marty McDaid – his second of the breathless evening – and Matthew McLaughlin gave Swilly a dramatic lifeline.

Finally, though, Grant converted from 12 yards and the pencils, considerably reduced in lead, could be put away.

After Jamie Lynagh cancelled out Marty McDaid’s opener in the first half, Bonagee gained a foothold with a rip-roaring start to the second half.

Bonagee were in front, four minutes into part two, when Doherty steered home from 12 yards after getting on the end of Grant’s centre. Swilly appealed for offside, but Vincent McLoughlin’s flag remained by his side as Doherty wheeled away after netting against his former club, whose personnel were incensed at the decision.

Swilly had barely time to shake their heads clear form the set back the Bonagee struck again, this time Grant flicking home from close range from Lynagh’s cross.

Just before the hour, Larkin must’ve felt as if he had all the time in the world as he stroked to the net..

Ordinarily, the curtains could have been closed – but Swilly summonsed a stirring riposte.

Swilly might have pulled a goal back instantly, but Kennedy Boachie-Ansah smacked into the side-netting when the home support sensed a goal.

However, their spirits and hopes were roused when Marty McDaid clipped in his second of the night and, within moments, sub Matthew McLaughlin scurried into the box to make it 4-3: Game on.

Swilly had their opponents on the rack for a time, but Grant’s penalty finally sealed the issue on a night when both sides – the bottom two in last season’s USL standings – showed considerably improvement in their first outings of the new season.

Swilly had taken the lead in the 34th minute when veteran attacker Marty McDaid – after being invited to have a go from Tony McNamee’s pass – saw his deflected effort squeeze home between Kealan Mulcahy, the Bonagee ‘keeper, and the post.

The lasted only five minutes. Swilly failed to clear Doherty’s ball into the crowded area and, arriving from deep, Lynagh sweetly fired high into the Swilly net beyond Gareth Muldoon.

Bonagee could have hit the front in stoppage time at the end of the opening period. Garbhan Grant sent Jordan Amstrong scampering clear, but he shot at Muldoon from a good position on the right edge of the area.

A healthy attendance converged on Swilly Park as the Ulster Senior League’s two new managers went head-to-head on the opening evening of the new term – though neither Swilly boss Tony McNamee nor Bonagee chief Jason Gibson could be considered new to the dugout.

Indeed, the presence of former Swilly manager Gibson – who had two Knockalla Caravans Senior Cup wins during his time by the Lennon –  now assisted by Swilly legend Michael McHugh added spice to the intrigue.

Both have recruited astutely, with Swilly seeing returning faces like McNamee junior, Dylan Hegarty, Duncan Patterson and James McCahill back in the red and white, with Bonagee – who were without striker Darren McFadden – having new signings Mulcahy, Thomas McMonagle, Armstrong and Grant among their number.

When McMonagle clattered into McDaid, it offered McNamee an early chance to have a go, but his free-kick was saved by Mulcachy.

The mercury rose and referee Marty McGarrigle flashed yellow cards to Lynagh, Hegarty and Doherty in quick succession before Swilly broke the deadlock and the tide of of goals began.