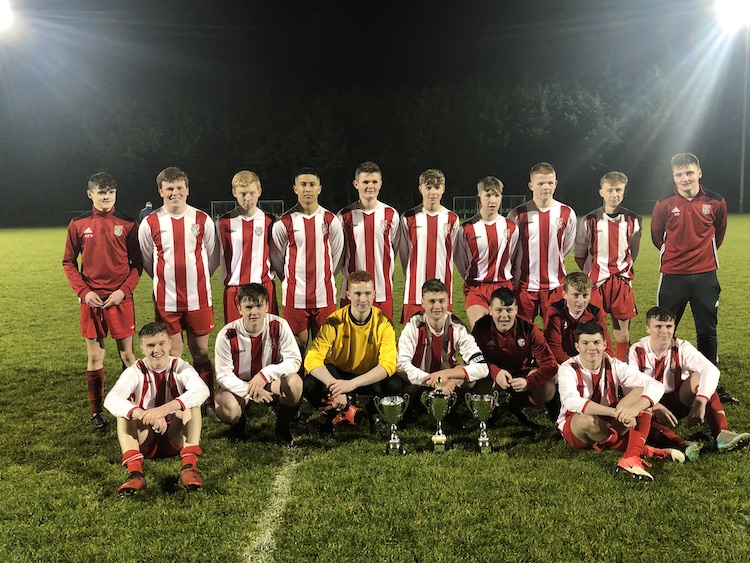 Dominick Doherty warmed up a bitter Ballyare night with a stunning goal to help fire Keadue Rovers to the Donegal Schoolboys Under-16 Champions League title.

The tie was poised on the edge of a knife when, with 13 minutes to go, Doherty let fly with a cracking strike that could have graced any stage.

Doherty struck the bullseye with a golden goal to light up this final and take Keadue away from Drumkeen United to claim their second Champions League crown of the weekend, following their U14s’ win yesterday.

Doherty’s magical moment went along with a brace from Odhran Burgess, whose opening goal was cancelled out by Matthew Coyle’s equaliser.

Yesterday, Ryan Brennan’ struck the match winner as Keadue overcame Erne Wanderers in the U14 Champions League final at the same venue.

Many of those same supporters returned from Central Park to beneath the floodlights at Ballyare as they jostled with the East Area kingpins Drumkeen.

Keadue hit the front after 11 minutes when Burgess nipped in ahead of Mark Gordon, the Drumkeen net minder, and steered home the opener. Burgess’ touch proved telling and was enough to take him beyond the advancing goalkeeper. 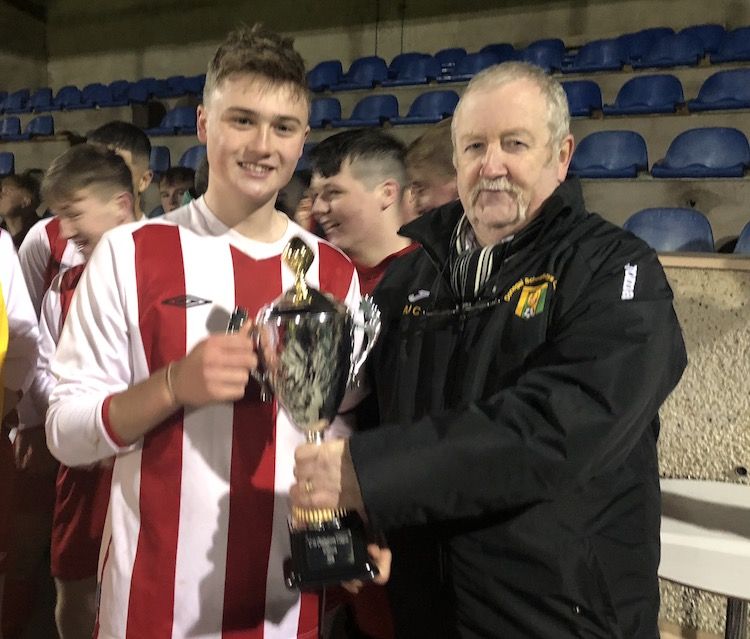 On the half-hour, Gordon, at full-stretch, brilliantly saved from Dominick Doherty’s testing low effort from 30 yards and got enough behind it to prevent the in-rushing Burgess from being able to get on the rebound.

Aaron Ward, from out on the right-hand side of the penalty area, powered narrowly wide with an early warning at the outset of the second half.

Bonner beat away from Aidan Martin at the other end.

Drumkeen’s Jamie Harris got his head on a free-kick, but flicked wide as the St Patrick’s Park side sought about getting back into the tie.

They did just that on 53 minutes when Coyle riffled across Caolan Bonner and into the far corner with an emphatic finish.

Owen Boyle tested Gordon from the edge of the area, but the Drumkeen ‘keeper was equal to the attempt while Ward drilled wide as Keadue upped the ante after Coyle’s leveller.

After Doherty’s bullet, Drumkeen were millimetres from levelling again, but McDermott’s effort, after getting on the end of a header back across goal by Martin, shaved a post.

In added time, Burgess rounded Gordon to tuck home a third and complete a glorious weekend for Keadue.