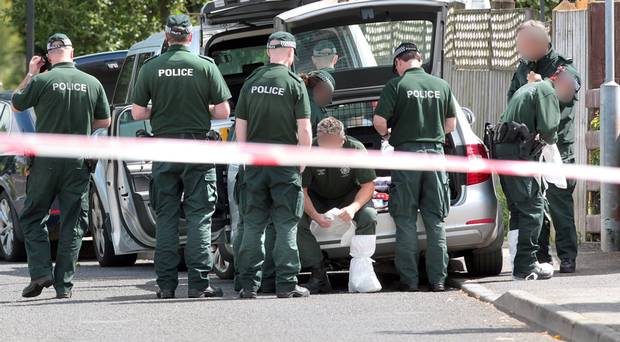 Officers at the scene of a car bomb murder bid on PSNI officer in Co Derry in June 2015. Bomber was later arrested by Gardai in Donegal after chase

A dissident republican arrested by a crack Garda unit was found guilty today over a plot to murder a PSNI officer with an under-car booby trap bomb in Co Derry.

He was convicted of having an under-vehicle improvised explosive device.

The judge said it was a “well thought out, planned terrorist plot” against a police officer.

He said the device was “an elaborate one, carefully constructed to ensure maximum damage”.

The judge said he was sure the device was intended to kill anyone who was unfortunate enough to get inside the car and drive it.

He added that he was “satisfied beyond reasonable doubt” that McVeigh had been the person who planted the device.

McVeigh had refused to give evidence at his own trial last August at Belfast Crown Court and the judge said he was drawing an inference from his refusal to testify.

The owners of the house at Glenrandel – a husband and wife who were both serving PSNI officers at the time – were asleep when the dissident terrorists struck.

The woman – who has since retired – woke from her sleep and looked out of the bedroom window and saw a man crouched down at the front driver’s side of the vehicle and putting something underneath.

She said she rapped hard on the window and the bomber fled to a dark coloured Volkswagen Passat waiting down the street.

The car sped away and was joined by a Toyota Versa and both vehicles then bolted to the border and into Donegal.

Both vehicles, which had been stolen, and bore false plates, were traced travelling over the border into Donegal, after driving through a checkpoint which had been set up on the Foyle Bridge.

They drove to Lifford, where the Toyota was abandoned in a car park, with the driver getting into the Passat.

As the VW drove towards Ballybofey, it was spotted by the alerted specialist Garda Regional Response Unit from Ballyshannon who gave chase, stopping the car by blocking its path about a mile outside the village of Killygordon.

Along with the driver, and a rear seat passenger, McVeigh was found sitting in the front passenger seat.

During the trial, over a dozen uniformed Garda and plain clothed detectives travelled to Belfast to give evidence.

They told how  the three suspects were ordered out of the car, handcuffed and made to lie face down on the ground after being arrested under Section 30 of the Offences Against the State Act.

The suspects were later taken for questioning at Garda stations. McVeigh, the court heard, would only give his name and date of birth to Gardai and refused to answer questions.

In a follow-up search of the route taken by the VW, Garda found three pairs of Tesco Marigold type gloves, later found to have traces of explosives residue.

Further traces of RDX were also found on swabs taken from the front seat of the VW car, the interior door handles and from the rear seat.

Similar explosive traces were found on the Toyota car located six days later in the car park where it had been left that night.

During today’s ruling, Judge Stephen Fowler QC praised Gardai for their meticulous handling of forensic evidence in the case and rubbishing defence claims explosive residue found on McVeigh had come from a police vehicle or a shed where the Passat had been stored after it was seized.

A number of Gardai involved in the investigation were present in court today to hear MVeigh being found guilty.

McVeigh was remanded in custody to Maghaberry prison in Co Antrim and will be sentenced at a later date.

He now faces up to 15 year in jail over the murder plot.