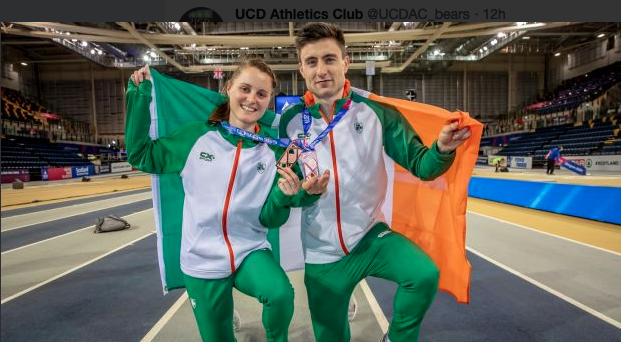 As Mark English rounded the final bend in the Emirates Arena, the doubts momentarily surfaced.

English, already a double European medallist, was never out of the top three in the 800m final of the European Indoor Championships.

But English gritted his teeth when it mattered most to stave off the advances of Spaniard Mariano Garcia to take third.

“I just about held on, but I’m delighted with the performance,” English said.

“I ran for the line as if it was down the far end. I knew if he got ahead of me there’d be no getting by him. I’m delighted with that result.

“He was coming on the outside and I just wanted to hold him off so he’d run wide.”

Andreas Bube, the Danish athlete with whom English shared lane 3 at the start, began to make a move, too, but the Letterkenny man – re-instated to a seven-man final after an appeal following his semi-final – had enough in him.

He said: “The plan was not to get caught behind anyone and be ready to attack when the time came.

“A few moves were made that interfered with the rhythm but I held it well. I took a really aggressive approach and it worked out. I came through nicely.”

The silver winner in these Championships in Prague four years ago, English  is now a triple European medallist after an injury-hit period in between.

English, who described himself as ‘more tactically aware’ now, said: “It means that I’m able to attack whether it’s slow or fast. I have a lot of confidence now.

“It gives me a lot of confidence to know the training that I’ve been doing is working.

“It’s really nice to come back and get a medal. That’s the nature of this game, you just have to stuck at it. That’s a lesson for any young athlete. It’ll be worth it when you get the good times.”