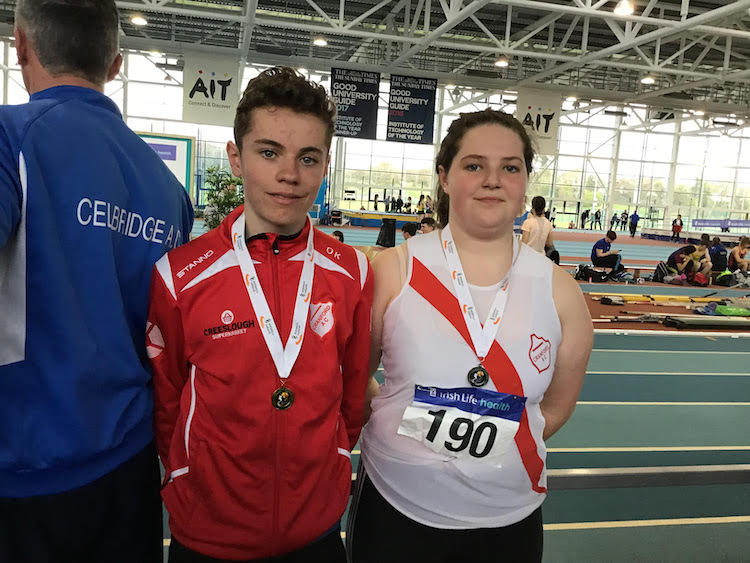 It was a great weekend for Cranford Athletic Club at the National Indoor Championship in Athlone.

On Saturday morning Oisin Kelly and Oran McMenamin took to the track to run in the boys U16 1500m which was 7 and half laps of the 200m track.

Both boys had a good start and stayed with the leading pack for four laps but drifted back slightly and with 300m to go Oisin was laying in 9th place but at the bell he made his run for home.

Once Oisin took off there was no stopping him and he crossed the line in first place claiming the title of National Champion. Great running from this young lad.

His team-mate Oran put in a great run and fighting to the line put in a gutsy performance finishing in 14th place.

Aoife Giles was next to take to the track for her shot put event and with Aoife in good form this season she couldn’t wait to get out and throw, she made the last 8 and laying in third place with her last throw she dug deep. Improving, she got herself into second place with a great throw on a great day for this young talented girl.

On Sunday it was the turn of Oisin Kelly again in the u16 boys 800m. He had the heats at 11am where he made the final that was scheduled for 5 o clock.

After coming off the back of his victory in the 1500m he was ready to go and once again Oisin got off to a great start.

With a very tactical and fast paced race it was a great battle to the finish with Oisin claiming the silver medal. This was a great Championship for Oisin and what a wonderful talented young athlete.
to the coaches and parents who travelled and helped out.

This weekend is the turn of Teresa Mullen in the Long Jump and we wish her good luck from everyone in the club.