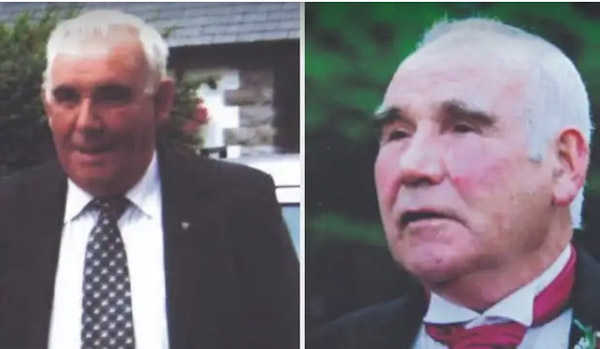 An inquest into the deaths of two elderly fishermen who perished off Inishowen has heard claims that the men’s boat may have been toppled by waves from a large ship.

The inquest in Buncrana into the drowning of the brothers 11 years ago returned a majority verdict of accidental death.

Experienced Glengad fishermen Danny McDaid, 70, and Francis McDaid, 69, died when their boat, the ‘Strath Marie’, floundered at the mouth of Lough Foyle on Friday, 14 March 2008.

RTE reports that the McDaid brothers’ lobster boat had been passed by a large Norwegian oil tanker shortly before it sunk off Kinnego Bay.

The larger ship was later searched and “bore no signs of damage”, however a marine expert said the wash from the passing ship “could have had an impact”.

Dr Norman Fullam said it was clear that a “very sudden” or “catastrophic event” had caused the sinking, because no mayday call was issued and both men had gone into the water with their Wellington boots on.

“If I knew I was going into the water I would get rid of my Wellingtons for sure,” he explained.

Dr Fullam, a former Assistant Director of Operations with the Coast Guard, who had worked for 20 years in Malin Head, said it was possible that the small boat could have “gotten a bang” from the “wash” coming off the larger vessel – but that the crew of the tanker “wouldn’t have been aware of that”.

“If the [McDaid] brothers were engaged in pot hauling at the time, if a wash came at that point it could have been very serious.”

“But there’s no evidence to that,” he added. “A lot of things could have happened.”

“These things happen at sea and unfortunately, unless there’s a survivor – we just don’t know.”

The brothers had arranged to go fishing the night before.

Ellen McDaid remembered that her husband Daniel had “done a few chores around the house” and was in “good spirits” before he left at around 7.45am on 14 March.

The weather was fine and both men were in “good form” when they set off in their boat from Bunagee Pier Culdaff an hour later.

However the Coast Guard was alerted at 5.20pm that evening when they hadn’t returned as expected.

Daniel McDaid was taken out of the water at 6.19pm by the Portrush Lifeboat and was then airlifted to Altnagelvin Hospital in Derry.

Francis McDaid was discovered almost two hours later by the Greencastle Coast Guard and was brought ashore at Greencastle before being removed by ambulance to Altnagelvin, after a helicopter was unable to land.

Both men were pronounced dead shortly after 9.30pm.

Pathologist Dr Gerry O’Dowd testified that the brothers died by drowning and were alive when they went into the water.

A meeting of the Greencastle Coast Guard on the night of the 14th heard that the ‘Strath Marie’ could have been involved in a collision at sea, “possibly with an oil tanker”.

Subsequently Derry PSNI Inspector Robin Young, who became the primary investigating officer in the case because the men drowned in UK-claimed waters, contacted Interpol and ordered that the Norwegian vessel be boarded and inspected.

After leaving Norway, the tanker was later inspected in Scotland by Strathclyde Police, who found no damage, with the crew reporting “no knowledge of any incident”.

Inspector Young also made a request for a voice recording from the ship but this was never obtained.

This week’s inquest heard that there had been an “undue delay” in the case because of the “peculiar nature” of the waters of Lough Foyle, which is claimed by both the Irish and British authorities.

The deaths were first investigated by the PSNI and later involved the Norwegian police and Strathclyde police in Scotland.

Initially Coroner Sheridan in Northern Ireland accepted jurisdiction but a full inquest was never held, and some years later Coroner Lecky passed it back to the Republic of Ireland side after making representations to then Taoiseach Enda Kenny, Minister Minister for Transport, Tourism and Sport Leo Varadkar and the Attorney General that it should instead be held in the Republic.

The coroner’s court in Buncrana heard that the Republic’s Marine Casualty Investigation Board had published a report into the sinking in 2010 but refused to engage with the inquest and did not send any representatives to explain its findings or to be questioned on aspects of the case.

Solicitor Ciaran MacLochlainn, acting for Daniel McDaid’s widow Ellen, said it was “an outrageous insult” to the coroner’s court and to the families of the men that the MCIB hadn’t attended.

“It’s an extraordinary situation that a State body that investigated the deaths of two citizens in mysterious circumstances should refuse to attend,” he said.

Solicitor MacLochlainn said authorities on both sides of the border had been “deficient” in investigating the incident.

Coroner Dr Denis McCauley also expressed his anger at the MCIB snub, saying he had made “numerous applications but they refused to attend”.

He conceded that the inquest, which he inherited via three other coroners, hadn’t had all the facts.

“We know what we know, but there’s an awful lot we don’t know,” Coroner McCauley added.

Relatives of the McDaid brothers were in tears after the jury delivered its verdict, which was reached on a 9-3 majority after close to an hour of deliberation.

The jury added a rider that any State body that has investigated an incident should in future produce a witness to explain its findings.

Inquest hears tragic brothers’ boat may have been hit by wave from ship was last modified: June 10th, 2019 by Staff Writer