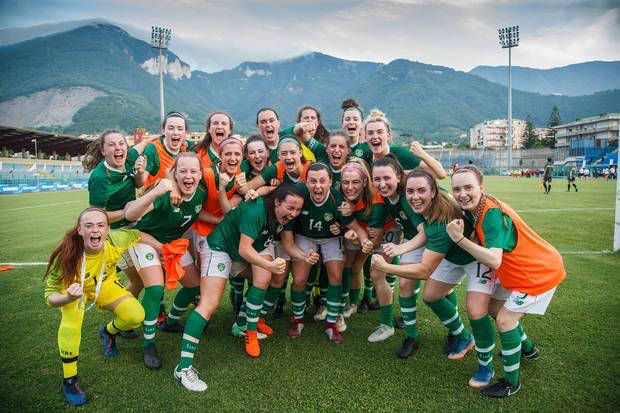 GEMMA McGuinness is prepared for any obstacle that North Korea throw at Team Ireland when the two teams clash in the 2019 Summer Universiade Women’s Football Semi-Final on Thursday evening in Salerno, Italy.

The Derry City attacker is one of three Donegal representatives, with Zoe Green and Zoe McGlynn in Dave Connell’s 20-woman squad that has reached the last four of the competition.

McGuinness, a student at Ulster University, is honoured to be able to represent her county and country on the world stage.

“It’s such an honour to be given this opportunity, especially to be with the two girls,” McGuinness said,

“Since none of us are playing in the Women’s National League in the Republic of Ireland we don’t get seen as much as some of the other players in the squad so it makes it even more special to be here with this great group.”

McGuinness has made two appearances off the bench thus far for the Girls in Green and has been enjoying being in the Universiade environment. “

She said: It’s been absolutely brilliant so far from everything from the food to the first class facilities. It’s been a brilliant experience overall.”

Looking ahead to North Korea, McGuinness is confident that the hard work that the side has put in up until this point will pay dividends in their pursuit for a first football medal.

She said: “It’s going to be a tough game without question, but we’ve taken everything else in our stride thus far.

“The level of coaching we have received has been unbelievable from the preparation in Ireland and the work we have been putting in since we arrived here will have us ready for what the Koreans have to offer.”

You can watch Team Ireland’s semi-final match against North Korea, live on FISU’s streaming service FISU.tv. Registration is free for the service.