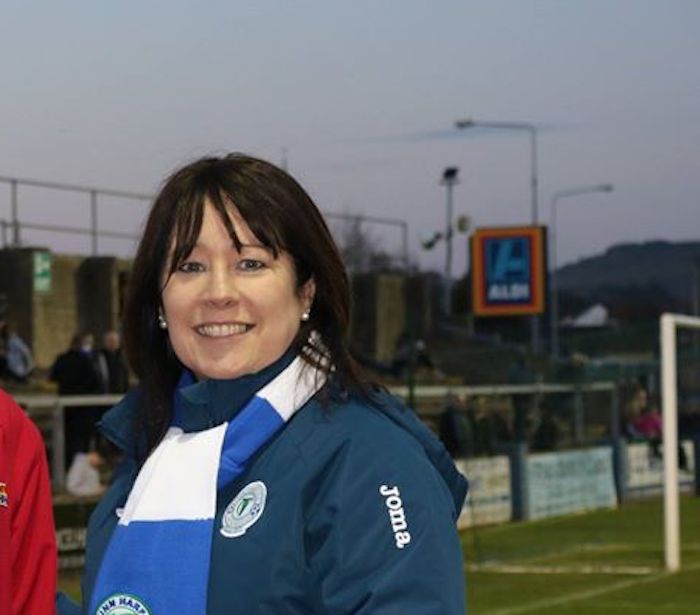 THE FIRST thing that stands out, during a ten-minute talk, is Kathy Taaffe’s use of the word ‘energy’.

In the past, it wasn’t too uncommon for one’s energy to have been sapped during a Finn Harps AGM.

On Sunday evening, though, Stranorlar woman Taaffe was elected as the new secretary of the Finn Harps Co-Operative Society Ltd. In all, five new directors were appointed with the seven existing Board members all returning to the top table.

Taaffe has been a familiar face around Finn Park in recent years. In 2016, with Harps playing Premier Division football for the first time in eight years, she was appointed as Match Night Co-Ordinator; a role that involved all sorts of odds and ends and a role that demanded energy.

Eight times, she mentions energy and it is something that the new secretary will be looking for from her Board and the various departments she’ll be looking to get involved for 2020.

“It’s a Board that will reflect the needs of the club,” Taaffe says.

“Positions such as communication and engagement has changed so much since the days of letter writing and stamps. But are we maximising that? Yes, to a point. Can we do more? Absolutely. There are people there who so full of energy and ideas. We have to capture that, harness that and make it work. We will make it work.

“My approach is to build a team of good people around me; people who will work and people who know the systems. We will work and learn together.  The offers of help have already been very positive, even when I first said that I would be going for secretary. I know who they are and I will be reaching out!

“There is so much potential here at Finn Harps. The future is bright, it really is.”

Taaffe takes over from John Campbell, the long-time club secretary who has stepped down from the tole to concentrate on working with the club’s academy and schools programme.

Campbell had two stints as secretary, either end of a spell by Alex Harkin. It was Campbell who took over from Joe Doherty, another who had been a number of years in the position. She joins Joe Boland, Aidan McNelis, Ivan Harvey and Trevor Gordon in stepping onto the Board. 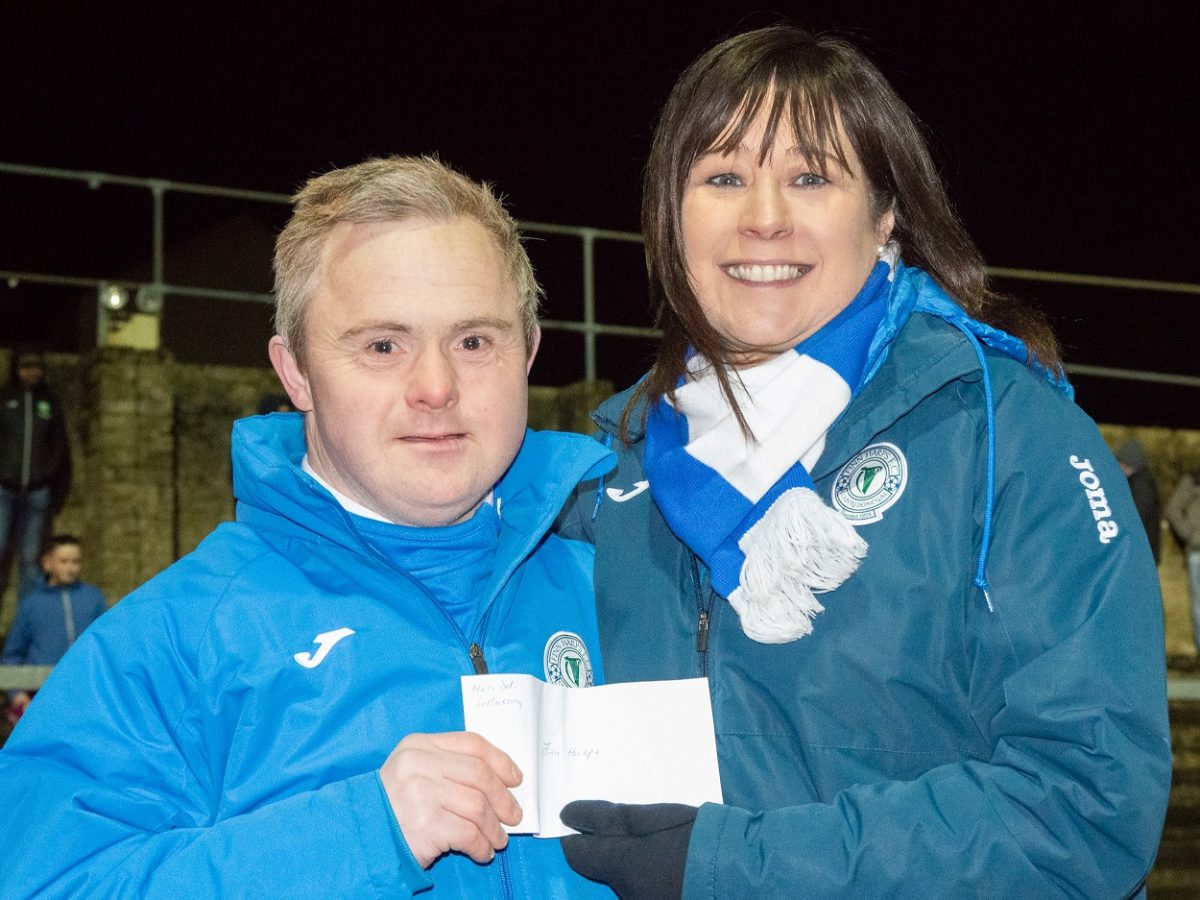 Around the Twin Towns, Taaffe is an experienced administrator, who has been Chair of the Twin Towns Gathering Committee and the St Patrick’s Day Parade Committee, while she has been on the Ballybofey and Stranorlar Chamber of Commerce.

Her new role is something outside of her norm.

“I’m not coming in blind to the role,” she says.

“It’s a huge role, but it’s a role and a function that I have filled in other committees and fora. It’s not one I’m completely ignorant of. That said, this is secretary of a Premier Division football club and there are a lot of strands there.

“I will be very open and honest in saying that I don’t know them all, so I do have a lot of learning to do.

“It’s very exciting. We have a lot of well-connected people who bring that energy and experience. They bring a vision, too. They want to drive for change and having all of that in the one room has to be very positive.

“There is a lot of new blood on the board. Ollie (Horgan, Harps manager) has spoken of the energy inside and outside the club. The energy outside the club he referred to were the new members coming on board.”

When mentioning ‘energy’ it is impossible not to touch on the impact of Horgan. The Galwegian is now the second longest-serving manager in Harps’ history, behind only 1974 FAI Cup winning boss Patsy McGowan. 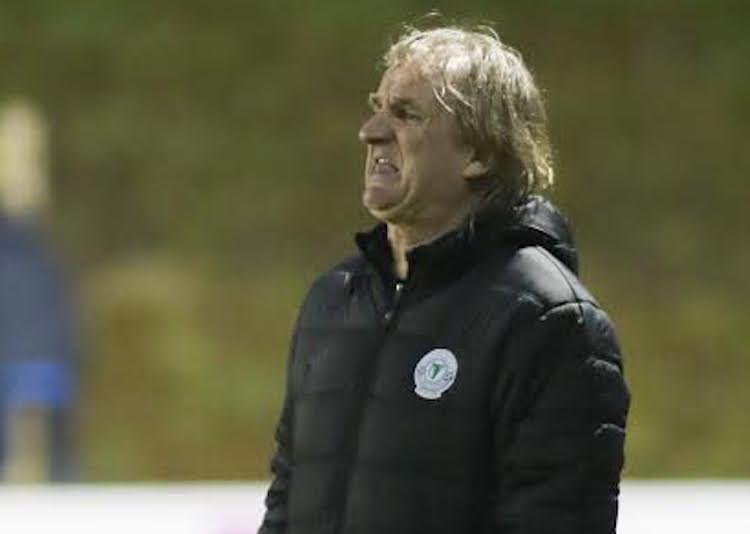 While the Harps squad from 2019 has broken up, losing the likes of Keith Cowan, Ciaran Gallagher, Harry Ascroft, Raffaele Cretaro, Mikey Place, Daniel O’Reilly and Nathan Boyle, Horgan is undaunted by the prospect of building a new team from scratch once more.

Donegal man Adrian Delap will arrive on loan from Derry City for the first six months of 2020, while Gareth Harkin, Mark Anthony McGinley, Tony McNamee, Mark Coyle, Mark Timlin, Kieran Farren and Stephen Doherty all confirmed on the roster by Horgan – who himself recently penned a new two-year contract.

“The team is the product,” Taafe notes.

“You see it at the tunnel at every match night, young people and old standing there; children high-living our players. They’re the heroes to those children.

“Ollie is busting himself to put a squad together and there are so many challenges, from budget to location. But Ollie is someone players want to play for.

“It’s for all of us to take a pause at any time and see the unseen effort into putting those 11 players on the field every night.

“Results on the pitch equate to so much else. It’s all one big circle, like a merry-go-round. The product for us are the players and the team.

“This is about Ollie Horgan, Paul Hegarty and those players. You see the energy and commitment they put in when they’re doing it for pittance. The struggles for them to keep that show on the road are enormous.”

Harps managed to stay in the Premier Division in spite of having a budget dwarfed by most of their Premier Division rivals. The arrival of Shelbourne, the 2019 First Division winners, will press a further strain on Harps’ ability.

Since for what seems an eternity, Harps have been referred to as a ‘sleeping giant’. In the late 1990s, the club paid a heavy price for attempting to flirt with the big guns. Giddy times included an FAI Cup final appearance in 1999. Two seasons later, Harps were relegated and left to count the cost of their ambition.

Nine years later, a Harps Board approved a move to full-time football and an annual budget of just shy of €1 million. The result was relegation and a balance sheet that still bears the scars of those decisions.

But it does not dim the energy of those who now believe they can do their bit to stop Harps’ continuance as a yo-yo club. 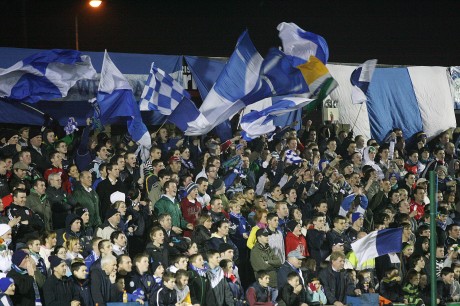 Finn Park, pictured packed to capacity back in 2007

“The fire that is being lit right now is all because of a few peoples’ belief and interest in what the club could do with some drive and some decent fund-raising,” Taaffe says.

“We can’t do anything about the facilities at the moment – and that’s a whole other matter – but we can work to make sure that Ollie has a better budget to work from. What potential is untapped there? We won’t work miracles, but there are some excellent ideas. They are real, meaningful ideas and we will explore them.”

The impasse with the development of the club’s new stadium in Stranorlar remains a constant frustration for everyone at Finn Park. As things stand, it’s anyone’s guess when work can or will resume with State funding to FAI-associated projects currently frozen.

Taaffe touches on the ‘emotional attachment’ and the ‘homely feel’ that Finn Park retains for those of certain vintages, but admits that the club has ‘outgrown’ the rusting home on Navenny Street.

“Last March, we were very confident that funding would be available and that we’d be able to break ground,” she says.

“That’s nearly a year ago.

“It’s frustrating, but it is unfortunately way outside of our control to do anything about that. This isn’t just about Finn Harps. This same situation applies to other clubs and other projects. The button isn’t being pushed on anything until the Minister is saisfied that everything is in order.”

Ultimately, the whole 2020 project the club embarks on will all boil down to first team results.

“Finn Harps Football Club one big jigsaw puzzle and we have to make sure to get the pieces together.”

The pieces can seem complex, prohibitive even, at times, but Taaffe appears to have the confidence – and the energy – to help lead the building of the puzzle.