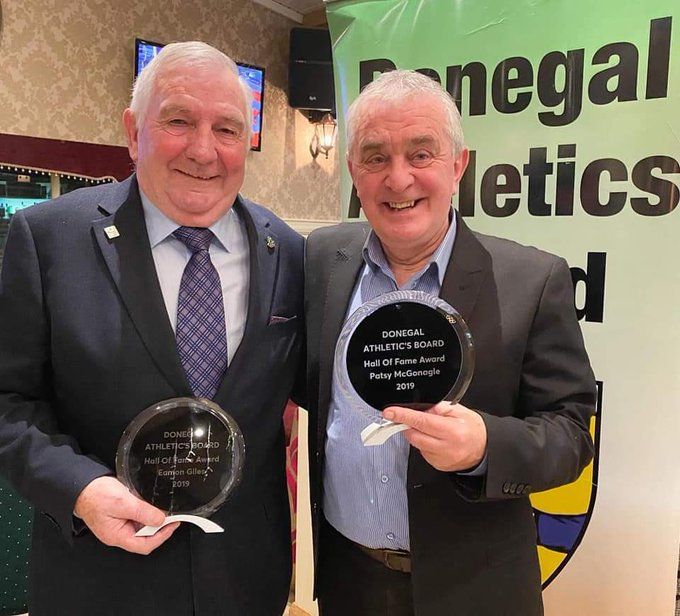 TWO of the founding fathers – Patsy McGonagle and Eamon Giles – have been inducted into the Donegal Athletics Board Hall of Fame.

Finn Valley AC’s McGonagle and Cranford AC’s Giles were inducted on Saturday night as the Donegal Athletics Board celebrated its 50th year at the annual dinner dance, held at the Finn Valley Centre.

A graduate from St Mary’s College for Physical Education in London in 1972,

McGonagle never lost sight of his home county and he built Finn Valley Athletics Club into the world class facility that includes the Patsy McGonagle Track.

Last June, McGonagle told his amazing story in his memoir, Relentless: A Race Through Time, published by Hero Books and which is available to buy on Amazon: https://www.amazon.com/Relentless-Race-Through-Patsy-McGonagle-ebook/dp/B07SQGBKYB

Giles set up the first athletics club in Donegal, Cranford AC, in 1961 and has been an ever-present since.

The Cranford club attracted athletes from all over the county and within eight years three Cranford athletes – Paddy Marley, Hugo Duggan and Danny McDaid – were representing Ireland at senior level.

Giles himself was an accomplished sprinter and is a seven-time Ulster champion. Indeed, he remains the Ulster 100m record holder with an 11-second effort at the 1967 Ulster Championships in Newry.

Giles is A Life Vice President of both Athletics Ireland and Donegal County Board, while he was selected as a member of the Donegal Athletics Team of the Millennium.