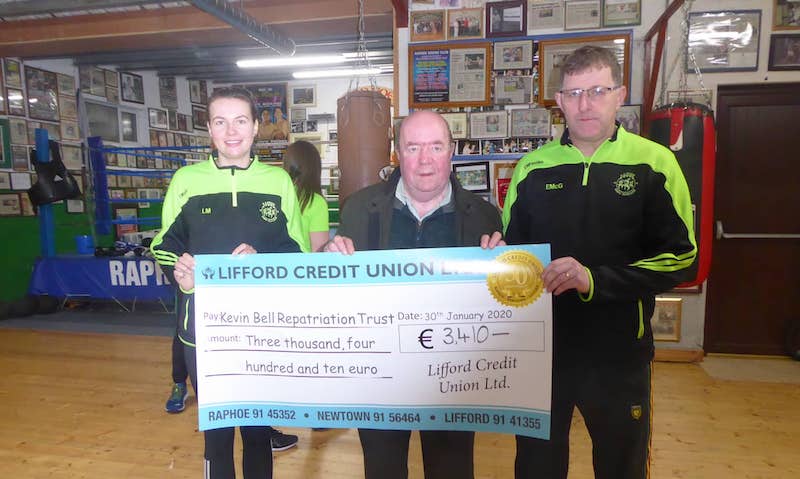 THE amazing work of the Kevin Bell Repatriation Trust was given a fantastic boost recently, thanks to the Raphoe Road Runners who donated €3,410 to the Trust following their annual 5K event on New Year’s Day.

Eugene McGinley from Raphoe Road Runners, explained that the Kevin Bell Repatriation Trust aims to alleviate the financial hardship of bereaved families, repatriating the remains of loved ones who have died abroad in sudden or tragic circumstances back to Ireland.

Picture: Colin Bell, Trustee of the Kevin Bell Repatriation Trust receives a cheque for €3,410 from Linda Macbeth and Eugene McGinley of the Raphoe Road Runners.

Eugene explained that twice over the past year, the Trust had been a great source of help to members of the Raphoe club.

He said club members were delighted that Colin Bell, Trustee of the Kevin Bell Repatriation Trust, was able to come to Raphoe to accept a cheque, raised through the annual New Year’s Day event.

“Colin Bell’s son Kevin was killed in New York in 2013 in a hit and run and the donations the family received at the time enabled them to help others. Since then this has grown into a full time charity, helping over 800 families have their loved ones return home.

“They organised my brother Enda’s return from London last year and Raphoe Roadrunner William Freney was also repatriated from Spain to Ireland in August of last year,” Eugene said.

“As a club we felt it was very fitting to try and thank everyone involved in the Kevin Bell Repatriation Trust for their tremendous assistance and we were delighted that Colin could come to visit us and we were able to give something back.”

The annual 5K in Raphoe on New Year’s Day is now one of the highlights of the festive season in the Raphoe community and has proven year on year to be a real community event. 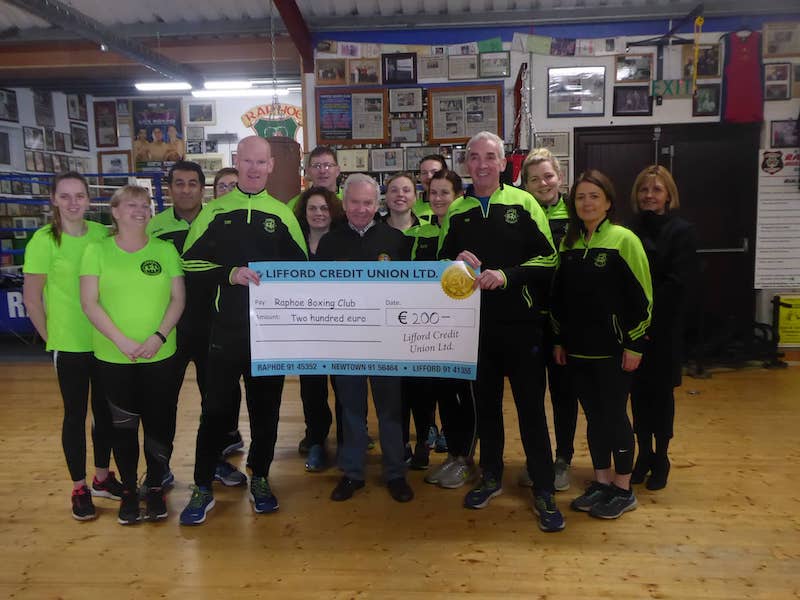 That has been helped by the fact that the organisers, Raphoe Road Runners, have continued to use the event as a fundraiser and over the past number of years they have donated proceeds to a whole host of charities.

This year’s event was once again a huge success and terrific community spirit in Raphoe ensured that the club was able once again to rely on the assistance they needed to make sure everything ran smoothly.

The race headquarters on New Year’s Day has, from year one, been the Raphoe Boxing Club and the Raphoe Road Runners expressed their gratitude to the club by presenting Peter O’Donnell with a cheque for €200.

Meanwhile the local running club has continued to grow in numbers over the years and is always keen for more people to come along and join them.

First time runners are every bit as welcome as experienced runners and the meet up is each Monday and Thursday at 7pm in front of the Royal and Prior School.