KILDRUM Tigers eased themselves deeper into the Donegal Premier Division title race tonight with a comprehensive win over Bonagee United.

Brian Breslin paved the way with a classy first-half hat-trick while Kevin McHugh’s second-half brace at The Diamond Park sealed a win that closes Kildrum’s gap to leaders Kilmacrennan Celtic to ten points. Crucially, the St Johnston side have three games in hand and are a side that, on this evidence, are purring along quite nicely.

Breslin put them in front in the seventh minute when he sped clear and beat John Carr with a superb finish.

On 27 minutes, Breslin – a winter recruit from Lifford Celtic who has significantly bolstered the Tigers’ bite – doubled the lead. Kildrum countered from a throw-in and, again, the lightening-quick Breslin, showing a clean pair of heels, nipped in behind the Bonagee rearguard to slip home his second of the night.

In between times, Carr saved from Oran Higgins’ prodded attempt after Breslin teed him up. Veteran McHugh opened the chance with an excellent through ball.

Higgins rounded Carr soon after, but was subsequently denied by the recovering Carr.

Kildrum – who had a fine 4-0 away win at Keadue Rovers on Sunday – were effectively home and hosed when Higgins turned provider for Breslin and he made no mistake with a third clinical finish.

Luke Toland clipped the top of the crossbar from 25 yards and Odhran McMacken had a similar result when he let fly.

Carr did well to thwart a close-range Breslin header and the Bonagee net minder appeared to have got fingertips to Gary Crossan’s tester from distance, although a goal kick was awarded.

The experience and guile of McHugh and Crossan proved instrumental for Kildrum, who were firmly in command of the night.

Bonagee had to give up home advantage after an afternoon pitch inspection deemed Dry Arch Park unplayable.

Bonagee did pull a goal back in the final minute of the first half when Aidan McLaughlin headed home from a corner after William Lynch – the Kildrum striker filling in as goalkeeper with Rory Carr unavailable – tipped over Eamonn Cannon’s attempt from long-range. 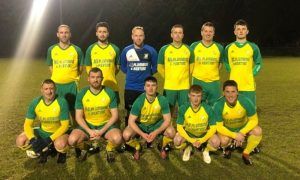 In added time, Lynch beat away a free-kick from Cannon and the two-goal advantage was a mountain for the men in green and gold to climb in part two.

Higgins curled narrowly wide on the hour but, three minutes later, it was 4-1 when McHugh headed home the rebound after his initial header, from Ethan Coll’s cross, hit the bar.

Breslin looked to have added his fourth, but an offside call cut short his celebrations as he swept home after Carr denied McHugh.

McHugh added the coup de grâce as a sumptuous effort from outside the box flew beyond the helpless Carr.

Next up for Shane McGinty’s menacing Tigers is a tasty looking derby against Castlefin – the defending champions – at Station Road Park on Sunday.