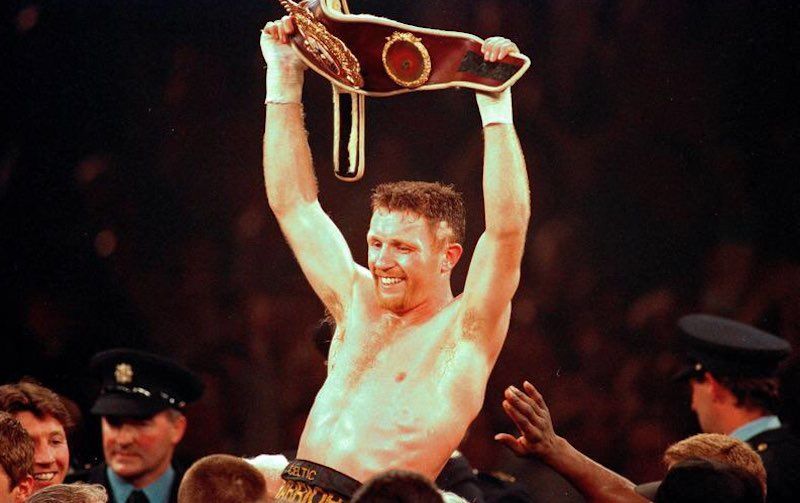 Flashback: Recalling one of Irish boxing’s greatest nights – 25 years on

EVEN now, 25 years to the day, Peter O’Donnell regards it as one of Irish boxing’s greatest nights.

The memory is as clear now as it was back then, on March 18, 1995, when the Raphoe ABC stalwart was among the 8,000 boisterous boxing fans at the Green Glens Arena in Millstreet, Cork.

It was the night when Ireland’s Steve Collins rose to the top of the world, the Dubliner beating Chris Eubank – who was making his 15th defence of the WBO World Super-Middleweight title.

Eubank was unbeaten in his ten years as a pro and Collins had moved up in weight having beaten Chris Pyatt to the WBO World Middleweight belt in Sheffield the previous May.

Millstreet 25 years ago was a night to savour for Irish boxing and a night that remains ingrained on the mind.

“It was among the top boxing nights I’ve ever attended,” O’Donnell – a regular attender at some of the world’s top bouts – tells Donegal Daily/Donegal Sport Hub.

“The atmosphere was just electric from the minute Collins came into the arena. It seemed as if he had the half of Dublin in Millstreet with him.

“It is still one of the biggest nights ever for Irish boxing. For Collins to win a world middle and then a world super-middleweight title was a huge achievement that stands the test of time.

“To see an Irishman top the bill in Ireland to win a world title, it was the stuff dreams were made of. To win it against an Englishman, who came in as the red-hot favourite topped the night altogether.”

Eubank entered the arena on a £10,000 Harley Davison as Collins – who employed mind guru Tony Quinn for the big bout – sat with his head bowed and headphone on in the corner.

The day had been long for O’Donnell and fellow local boxing aficionados Brendan Ryan (RIP), Tommy Stewart and Dominic McCafferty, who set off for what was then an eight-hour voyage down Ireland’s west coast.

It was the Wild Atlantic Way long before the phrase was employed by tourism chiefs.

“We drove down in Tommy’s Renault – he was the only man among us with a half-decent vehicle at the time,” O’Donnell says.

“We met Barry McGuigan and Glen McCrory, who were two huge boxing personalities at the time, going into the venue.

“We left Raphoe very early that morning and had a couple of stops on the way down. The whole feeling around the place was brilliant. Every bar was jammed, some even shut the doors. There were sing-songs every road and there was a long walk to get out to the venue at Millstreet. You couldn’t have been under any illusion about the size of the occasion.”

Collins had Eubank on the canvas in the eighth round and Collins himself was down in the 10th. At the close of the 12 rounds, the air warmed even more.

Eubank, climbing on the ropes bellowed ‘I got a draw’ as the mainly-Irish Millstreet audience howled back: ‘On yer bike!’

“It was a cracking contest,” O’Donnell says. “From the first bell, they were cautious for a few rounds. The two of them got the weight of each other’s punches tested and they went to war. Collin was a tough man.”

They hadn’t christened him the Celtic Warrior without good reason.

Collins was in the St Patrick’s Day spirit with shamrocks shaved into his hair.

All of them were in favour of ‘the new WBO world middle-weight champion’, Collins, who would go on to make seven successful defence of the title – including two wins against Nigel Benn – before he retired from the sport.

Collins’ first defence was against Eubank, six months later and again in Cork, this time at Pairc Ui Chaoimh. Again, O’Donnell and company made the long pilgrimage, but their number had increased for what was a special night in Donegal boxing, too.

Raphoe ABC’s Irish middleweight champion Danny Ryan (Brendan’s son) was on the undercard for his third professional fight, his first on Irish soil. Ryan made it a memorable voyage for the Donegal crew as he defeated Paul Mason on points after six rounds, while Collins claimed a split decision win over Eubank.

“It was great, too, for everyone coming behind. You had the success of Michael Carruth and Wayne McCullough at the 1992 Olympics and these nights were magical, just after the McGuigan era. It was a big lift for the sport.  Those men were big names; names that could have went anywhere in the world.”

O’Donnell, now the Donegal Boxing Board’s President, remains as passionate as ever about the sport.

A loyal supporter of Donegal middleweight Jason Quigley – now listed at number 14 on the WBC’s world rankings – he believes his good friend will be the next to return a world title to these shores.

He says: “I think very soon, Jason will become a world champion – I have every faith that he is going all the way to the top and can start another great era for Irish boxing.”