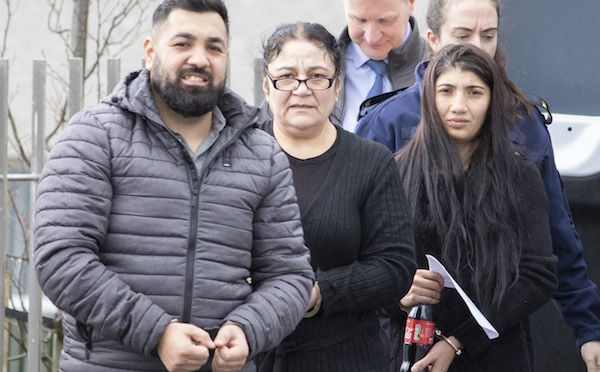 A gang who distracted a shop assistant and stole almost €30,000 in cash and jewelery from a Co Donegal antiques shop have been jailed.

The trio all appeared at Letterkenny Circuit Court today (Fri) where they were sentenced to between two and three years in prison.

They were part of a six-member gang, five women and one man, who crowded into Mourne Antiques on Main Street in Letterkenny at around 4pm on January 18th last.

They distracted lone sales assistant Keith Stevenson before one of the women managed to slip into a staffroom at the back of the shop which contained a safe.

The woman got access to the safe and took approximately €5,000 in cash as well as 18 items of valuable jewelery valued at a further €22,000.

The haul included items left in for repair and valuation by customers including five engagement rings, one wedding ring and another engagement ring which was to be reshaped.

The woman placed the cash and the jewelery haul into a specially made bag which was tied around her waist and put under her clothing.

The woman went back into the main part of the shop and all six members fo the gang quickly left the premises.

The distracted shop assistant did not realise the woman had even been in the staffroom and locked up the popular shop a short time later and went home.

The three before the court were Daniel Constatin Mandescu, aged 31, Larisa Craioveanca, aged 51, both with addresses at Usher’s Quay, Dublin and also Vasiliaica Bita, aged 51, of Belmount Court in Dublin.

CCTV footage within the shop shows one of the women putting the items into a makeshift bag which was around her waist under her clothing.

The gang left the shop quickly and the shop was closed up as normal a short time later.

However, that evening shop assistant Keith Stevenson began to think about the events of the day and returned to the store that evening.

He then noticed the items and the cash were missing and contacted the shop owner Frances Spears who had been in Dublin at a trade show for the weekend.

Gardai issued a national media alert after the robbery.

When arrested four of the bags used to hide items were also found in the car.

The court was told that only a small number of the stolen haul have been recovered after they were sold to jewelery dealers in Dublin.

The owner of the shop, Ms Frances Spears, told how the robbery has made her more suspicious and she has now been forced to put two staff on duty in her shop and also increase security.

Her insurance costs had also increased by 25%.

“How people could just walk into my shop and take what they wanted just baffled me,” she said.

Ms Spears had spent 30 years building up her business and had only moved into her new premises six months previously.

She said she felt so sorry for her shop assistant Mr Stevenson who had to take a week off work because he was so upset.

She also had to contact all her clients who owned much of the jewelery stolen as it had been in for repair or valuation.

She added “My customers were very upset at their loss. Some were sympathetic but I knew they wouldn’t put their trust in me lightly as they did before. Another worry. How do I build their trust?

The court heard that all three accused had previous convictions for theft in a number of countries including Germany, Belgium and also Northern Ireland.

Passing sentence Judge John Aylmer said this was a premeditated and purposeful targeting of an antique shop to steal items of high and sentimental value.

He placed the offences in the mid-range.

He jailed Mr Constantin Mandescu to two years and nine months but suspended the last nine months for mitigating circumstances and backdate the sentence until January last when he went into custody.

He also ordered that upon four weeks of her release, she should leave Ireland and not return for a period of ten years.