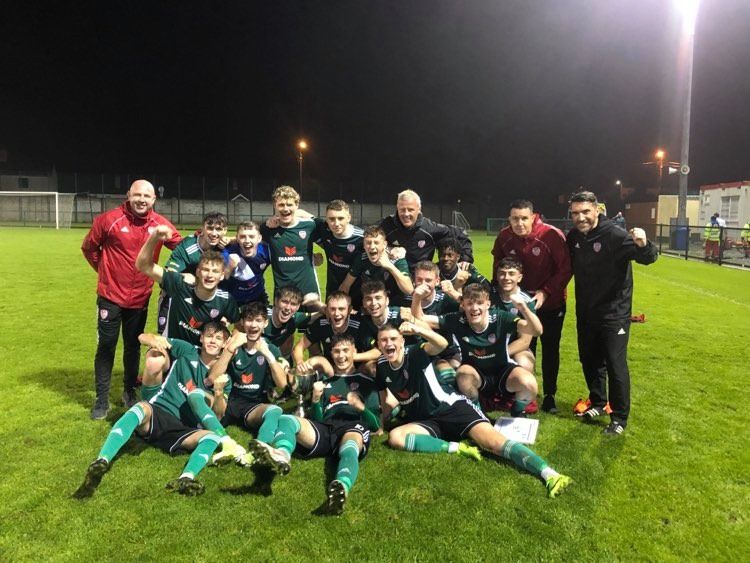 In driving rain at Maginn Park, Derry’s young guns twice came from behind to claim a dramatic win.

Sean McDermott and Patrick Ferry cancelled out goals by BJ Banda and Matty Harkin before Kennedy struck with 17 minutes to go.

Matty Walker, who was named as the Tom Bonner Man of the Match after an influential outing, gave the pass and Kennedy’s shot, from 25 yards, took a wicked deflection past Rovers goalkeeper Rory Kelly.

Two minutes after Kennedy put Derry ahead for the first time, Ferry stroked wide of the far post after racing clear for a chance that could have put the game out of Rovers’ reach.

The Cathedral Town outfit had been waiting for six months for this decider to roll around, their semi-final win over derby rivals Bonagee coming as far back as early March, in the days before the country went into lockdown.

Rovers’ season began some 395 days beforehand, on 11 August 2019, with a 5-2 defeat by UCD in the FAI Cup in Belfield and ended here in disappointment, particularly on the occasion of McConigley’s swan song.

McConigley has been the Ulster Senior League’s one constant since its inception in 1986, when he was a player at his native Fanad United, with whom he enjoyed unprecedented success as player and a manager.

Rovers were stung by two injury time strikes by Garbhan Grant seven nights ago as Bonagee United prised the Donegal News USL League Cup from their clutches – and they were in Buncrana on a mission to give McConigley the perfect send-off. 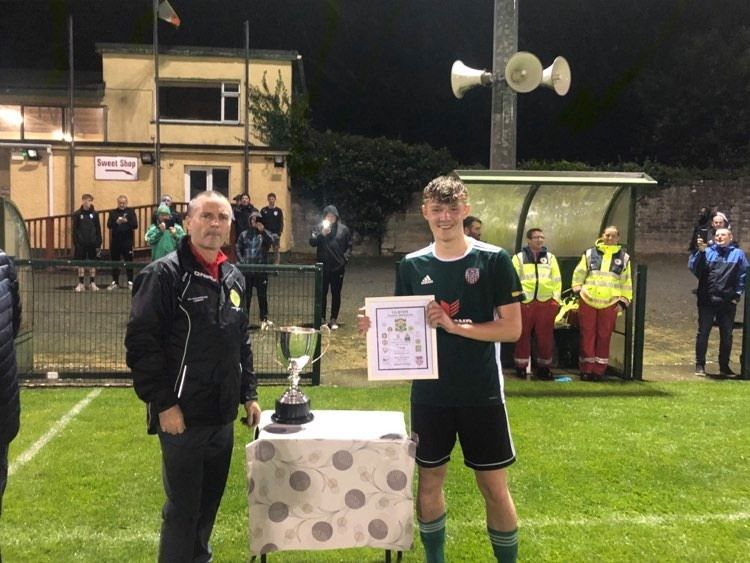 Matty Walker receives the Man of the Match award

The night got off to the perfect start for them as Rovers hit the front just eight minutes in. The wily Davitt Walsh pounced to nick the ball from Dean Corrigan’s toe and off-loaded to Banda. Goalkeeper Oran Gibson got a strong hand to Banda’s effort, but was unable to prevent the goal.

Derry drew level four minutes before half-time when McDermott rose to head in off the post from Matty Walker’s in-swinging corner, but it was short-lived joy as Harkin converted two minutes into added time to restore the Rovers advantage.

Midway through the second half, Derry equalised a second time, Ferry wonderfully glancing home a header from Jason Donegan’s delivery and soon after they were in front.

Derry lost out to Cockhill Celtic in a semi-final at The Lakeside last month, but the Candystripes were readmitted after Cockhill were found to have fielded a Cup-tied player, Christy Fildara, who lined out for Glengad United in an earlier round.

With the first team in friendly against Larne at Inver Park, the Candystripes side here was devoid the likes of Ronan Boyce, Jack Malone, Jake Lemoignan, Brendan Barr, Caolan McLaughlin, Evan McLaughlin, Michael Harris and also manager Mark McChrystal. All of them have been key figures for the young Candystripes this season with Barr having been particularly excellent in the semi-final.

Derry – under the watch of the under-19 manager Shaun Holmes – shook their heads clear and Kelly held onto a drive from Kennedy, who was teed up by Daylen Farren outside the area.

Walker tested Kelly  before the Rovers ‘keeper had to scramble back possession from a Walker corner as Derry came into it. Rovers almost hit a breakaway second, but Gibson recovered in time when a deft lob by Rovers midfielder Harkin initially beat the Derry net-minder.

After McDermott headed in, Harkin bundled home at the far post to give Rovers the interval advantage after Johnny Bonner had made a telling incision down the stand side.

Seven minutes after the restart, Ferry invited an attempt by Walker from just outside the box, but the winger was unable to keep his shot on target. Ferry himself tried his luck, but Kelly beat away his powerful shot.

Derry were on top throughout the second half and the tide swung to give them a deserved slice of success.