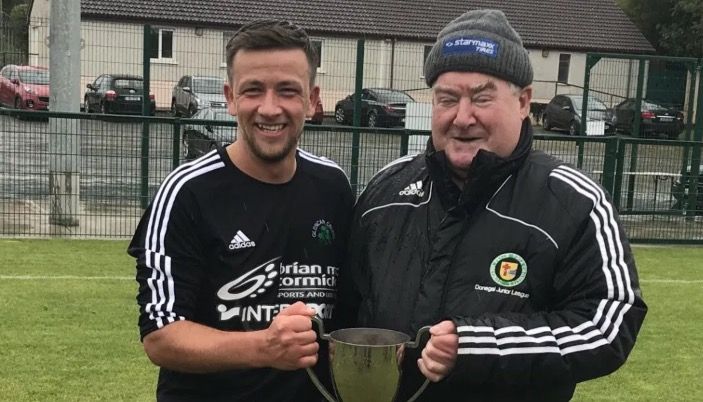 Holders Glencar Celtic started well and were rewarded in the fifth minute when Patrick Rafferty slid a pass through for Eddie McLaughlin and despite having a couple of defenders in close proximity the striker kept his composure and shot low to the corner of the net.

Keadue took time to settle and apart from a few crosses, Glencar’s Blake Forkan had little to do. In the 18th minute the goalkeeper was almost caught out when he changed his mind about dealing with a ball wide on the right and Owen Boyle’s lobbed effort was just over.

Glencar responded well – Rafferty’s 20-yarder was deflected out for a corner in the 25th minute and Ciaran Maloney’s cracker from 25 yards was brilliantly saved by Declan Ward a minute later.

Those let-offs were shortlived, however, with two more Glencar goals arriving in a two minute period.

In the 34th minute two Keadue defenders failed to deal with a through ball and paid a high price as Paddy Collins raced onto the loose ball and drilled it past keeper Ward.

Two minutes later it was 3-0 – Maloney’s drive was deflected into the path of Rafferty inside the box and his flick beat Ward and Eddie McLaughlin followed up to make sure it went over the line. It meant an ensuring a debate as to who’s goal it was.

Keadue, 3-0 down at the break, had a mountain to club.

They needed an early breakthrough and almost got it in the 47th minute when half-time replacement Adam McCaffrey’s second attempt at a cross flicked Forkan’s  crossbar.

Glencar responded and Ward saved well from Rafferty. McCaffrey was proving a handful and forced Forkan into an excellent save and then was just wide with another fine strike from 20 yards.

Keadue’s chances of a unlikely comeback were further diminished in 59th when full-back Jay Doherty was red-carded for a high tackle on Graham Cullen. It was a case of an overeager tackle rather than a nasty one but Referee Liam McLaughlin, who had an excellent game, had little choice but to show red.

Keadue finally got the reward their efforts deserved in the 87th minute when Owen Boyle pounced on a loose ball in the box and hammered it into the roof of the net.

There was plenty of endeavour from both teams in the final half-an-hour but it was difficult not to believe that despite Keadue’s fine start to the second-half the sending-off had ended any hopes of a serious comeback and Glencar were happy to see it out and retain their Voodoo Venue Cup title.