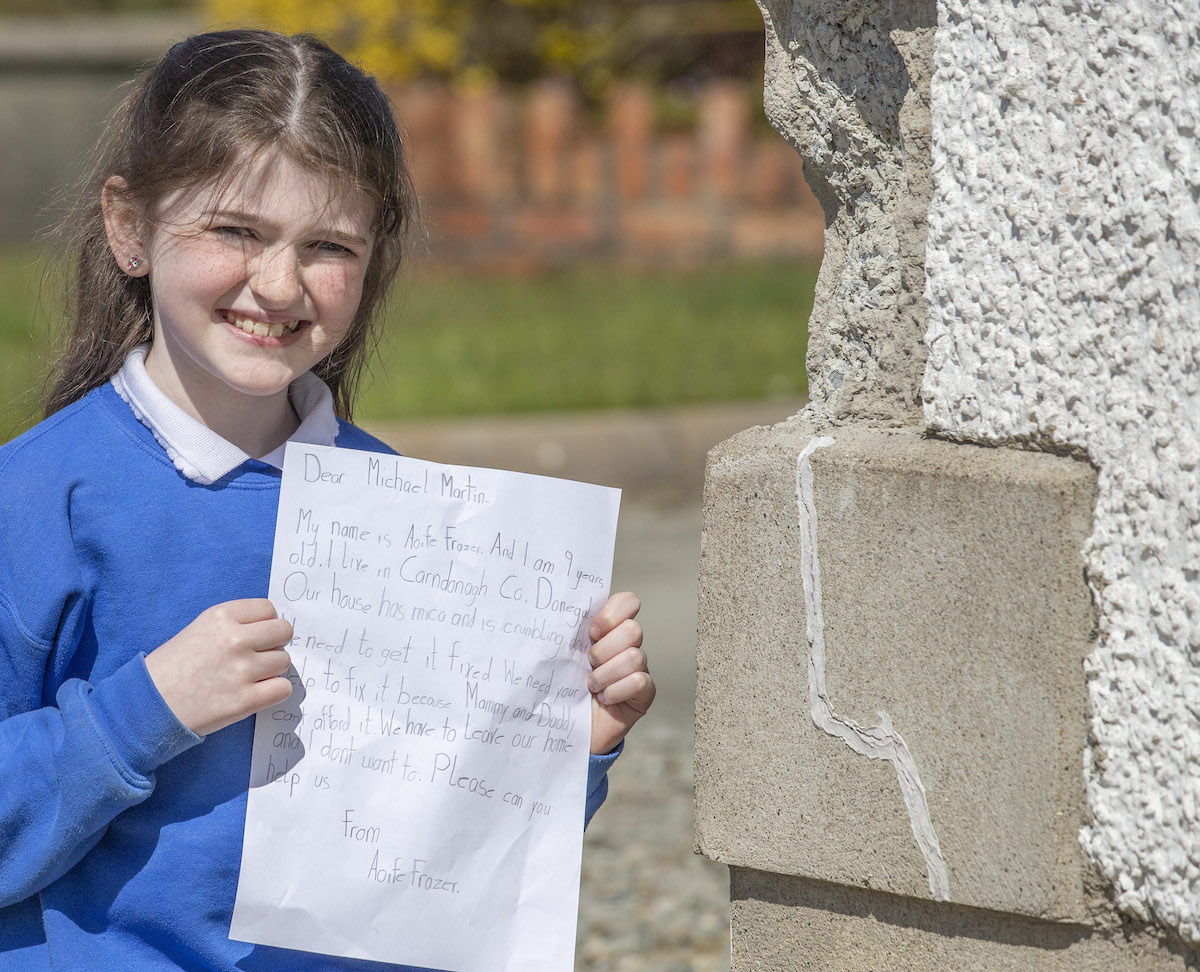 written by Chris McNulty May 27, 2021
FacebookTweetLinkedInPrint

A DONEGAL schoolgirl has pleaded with the Irish Government not to leave her homeless.

Nine-year-old Aoife McLaughlin from Carndonagh is scared that her family will have nowhere to live due to the MICA crisis.

Thousands of homes, including that of the ‘Frazer’ McLaughlins at Gortnacool, Carndonagh, are cracking and crumbling due to faulty building blocks.

Aoife, a pupil at St Patrick’s Girls NS in Carndonagh, has written a moving letter, which she has sent to Taoiseach Micheál Martin and Housing Minister Darragh O’Brien.

“Our house has mica and is crumbling down,” Aoife wrote.

“We need to get it fixed. We need your help to fix it because Mammy and Daddy can’t afford it. We have to leave our home and I don’t want to. Please can you help us.” 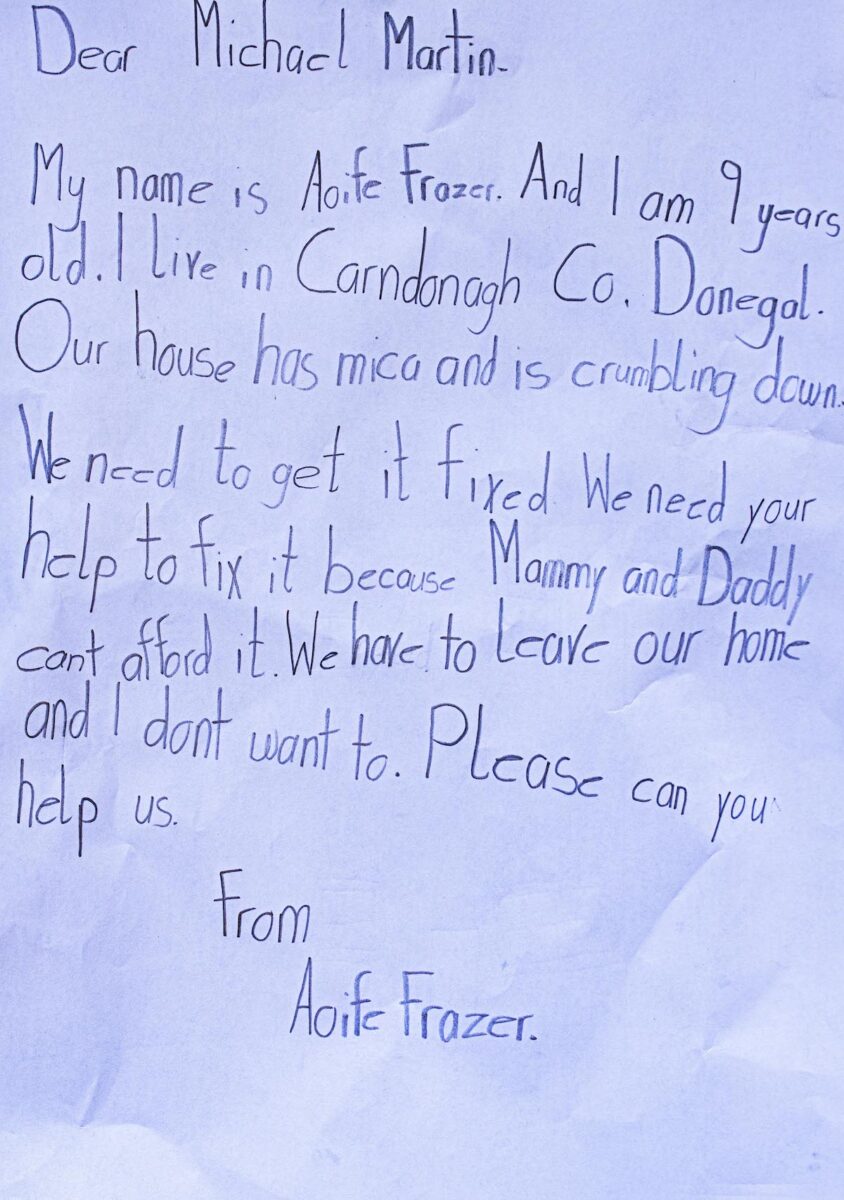 Her mum, Lisa, says that Aoife was impacted by seeing a homeless man on the street in Derry.

“That played on her mind for so long after it,” Lisa said. “some nights I would be putting Aoife to bed, she’d say: ‘Those poor homeless people are laying outside and I have a nice, cosy bed’.

Seven years ago, when Raymond McLaughlin went to investigate cracks that were appearing on the walls, a block crumbled in is hand. The worst fears were confirmed in that moment.

Lisa said: “When we’re in the kitchen at nighttime, you can see the blind blowing in the front window. When there isn’t a sound to be heard, you can actually hear the cracking now. 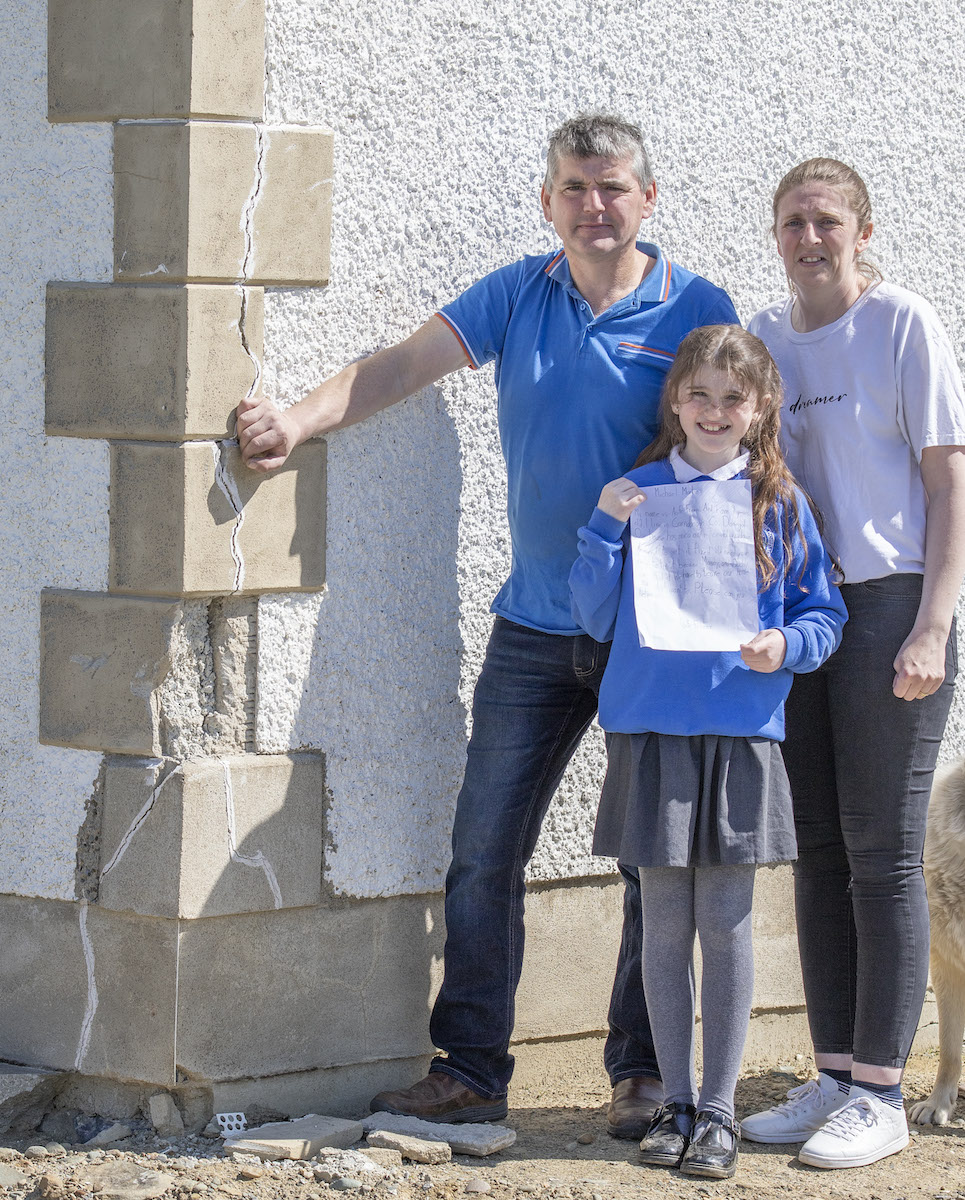 9 yr old Aoife Frazer McLaughlin and he parents Raymond and Lisa with the letter she wrote to An Taoiseach Micheal Martin about the crumbling house she lives in. (NW Newspix)

“The girls’ bedroom was in a bad state last year and we got it repaired and painted. That was only in April last year. About six months later, the cracks have reopened again.”

The McLaughlins started building their home in 1999.

Lisa said: “We put our heart and soul into it. Everything we own is in there. Now, we have to watch a digger go in, take it down and put it into a trailer.

“We didn’t take any shortcuts in building this. We thought everything we were doing was the right thing. Now, all we’re left with is Wheetabix.”

Each wall that has a window has to be replaced right down to the foundations.The McLaughlins will be deposed from their home while work takes place.

At the moment, they are at stage two of a three-stage application process with Donegal County Council. This scheme  doesn’t allow for new windows, doors or kitchen units and the process is tedious.

Lisa said: “We can’t afford to pay a mortgage and pay to rent somewhere – very few families would be in a position to do that.

“We’ve already spent nearly €6,000 so far on this. One part of the application came back because the eircode wasn’t written on it.

“Another part came back because a certain page had to be uploaded separately. It’s tough and it’s a costly procedure.”

Over 10,000 people marched in Donegal last weekend calling for a 100 per cent redress scheme from the government A scheme offering some redress for victims of the scandal is not affordable for many of those with crumbling homes, including the McLaughlins.