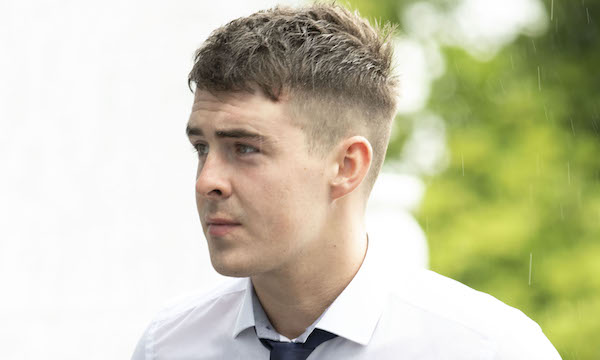 ‘Only going one way’, Judge warns man after verbal abuse of Gardaí

Officers saw two men standing on the side of the road, one of whom was Evan Quinn Sgt Collins said Gardaí were unsure if Quinn was driving the car on the night in question.

When asked by Gardaí to empty his pockets, Sgt Collins said Quinn became abusive, calling one Garda a ‘dirty f***ing slut’ and another ‘a ginger c***’.

Quinn was slurring his words and unsteady on his feet when he was arrested.

Quinn (25) of Meenagorey, Buncrana was before Buncrana District Court over the incident.

Previously, Quinn was convicted for careless driving causing death, for which he was given a nine-month suspended sentence in May 2019.

Solicitor for Quinn, Mr Rory O’Brien said his client wished to convey an apology for his actions ‘in particular the abusive language’,

“There is no excuse whatsoever,” Mr O’Brien said.

“The Gardaí are doing their jobs and they shouldn’t be subjected to that. He was highly intoxicated and reacted inappropriately.”

Mr O’Brien said his client, who is an unemployed plasterer, ‘had difficulty with behaviour in the past’.

“He has changed as a direct result of this,” he said. “He is addressing any difficulties. He has engaged in more productive activities and a very healthy lifestyle.”

“This is only going one way for him,” Judge Murphy said.

“For someone like this young, behaving like this when intoxicated will lead to difficulties. It has led to serious difficulties before.”

Addressing the court, Quinn apologised to the two Gardaí. “It won’t happen again,” he said. Sgt Collins, on behalf of the members, accepted Quinn’s apology.

Judge Murphy said she was concerned about Quinn’s behaviour and his previous record.

She convicted Quinn and fined him €300 for a charge of using or engaging in threatening, abusive or insulting words or behaviour with intent to provoke a breach of the peace.  A charge of being intoxicated in a public place was taken into account.

Judge Murphy said: “If he is before the court again, it’s only going one way for him.

“His behaviour is completely unacceptable. Gardaí are trying to do their jobs in very difficult circumstances. They certainly do not deserve that type of verbal abuse. Mr Quinn needs to address his issues with alcohol.”