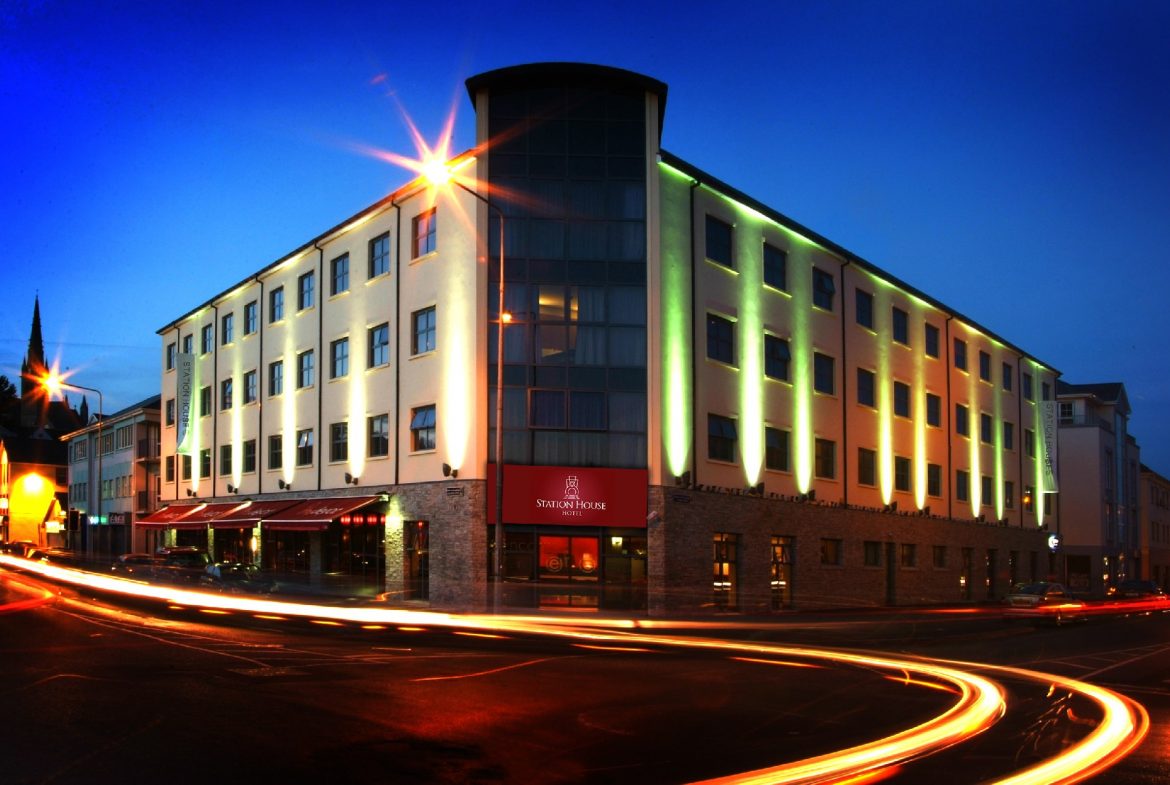 Back in the middle of the last century, the writing was on the wall for Donegal’s railway network.

Sadly, that writing proved all too prophetic but the images and the words live on and one of the latest creations will be unveiled on Monday evening next in Letterkenny.

It, too, is on the wall and fittingly occupies a space on the gable of the Station House Hotel – a spectacular mural depicting Engine No 3 crossing the bridge back in the day when the trains ran and did their level best to keep up with the timetables.

The mural is the work of father and son artists, Kevin Gallagher and Kevin Jnr. and was set in train by the Letterkenny Community Heritage Group.

“It’s a brilliant piece of work and we are delighted that it is to finally be officially unveiled,” says Johnny McCollum, the group’s chairperson.

The image of the steam engine is derived from a painting by another local artist, John Baird, – a painting that has been hanging in the Station House Hotel for a number of years.

The hotel proprietor, Brian Gallagher, who will perform the unveiling, was more than keen to accommodate the mural when initially approached by the Heritage Group committee.

“Everyone is welcome to attend and we are particularly hoping that those families who had connections with the railways over the years will come along,” Johnny extended an open invitation.

An occasion that will prompt memories for those veteran enough to remember the rail deal – a coming together of the twin tracks of history and heritage.

As the late John McIntyre recalled in an article in the ‘Donegal People’s Press’, the last train to carry goods to Gweedore (the terminus for over six years) pulled out from Letterkenny at 2.p.m. on Saturday, 6th January, 1947.

“Something of an historic happening, marking as it did another phase in the gradual close of rail transport before its rubber-shod rival on the roads; it passed off simply and indeed pathetically uneventfully.

“There was no big turnout of people to wave a last farewell; no scenes of emotion; no voice of protest, regret or satisfaction – nothing indeed to distinguish this break with a long and cherished tradition from any of the countless similar departures of the train and its crew. Members of the train staff left their desks for a few minutes, good humouredly to wave a farewell to the driver and fireman and guard,” John related.

But there were some caught up in the emotion of the day.

He added “I could not but feel, however, that the stationmaster himself, the ever genial and accommodating John O’Neill, an old railwayman of long and varied experience, had a real pang of regret as he watched the last wisp of smoke from the engine, as it rattled its merchandise cargo around the bend towards Oldtown. Indeed, he told me as much, while conceding that as matters stand, rail-transport on this section must necessarily end.”

And there was another employee of the railways who, John reflected, may also have been feeling the sentiment of the occasion even if he wasn’t showing it.

“Condy McNelis, who has manned the guard’s van daily for close on ten years, was his usual serene buoyant self as he trucked the last bag into the covered wagon and signalled all ready to get under way. With an all-in-the-day’s-work attitude Condy admitted no lump in the throat at the closing of the line. Still, I wondered if he was not trying hard to conceal his feelings.”

John also spoke to two other employees though neither appeared keen on seeing their names or images in a local newspaper.

“Driver Hughie Boyle and fireman Jimmy McNelis (Condy’s brother) went about their accustomed routines on the footplate as the train slowly clanked out from the platform, and neither seemed to relish the idea of being ‘in the news’ or of having their pictures taken.”

And what of the future, John wondered in his article? “Nothing definite could be learned,” he indicated but what was certain, he maintained, was that the line had rendered a valuable public service since its first train set out for Burtonport in the early days of far off 1903.

The future referred to would soon arrive and the railway lines of Donegal would be no more but through books and periodicals, on line (sic!) recollections, and numerous images and exhibitions, they have lived on.

The impressive mural at the Station House Hotel provides another representation of how it once was in Letterkenny and beyond.

And there will undoubtedly be a bigger turnout for its unveiling than was the case when the last goods train left Letterkenny on the Burtonport line to Gweedore seventy-four years ago.

Music for this Monday evening’s (30th) occasion will be provided by The Wild Rovers and the unveiling is due to get underway at 7.30.p.m.