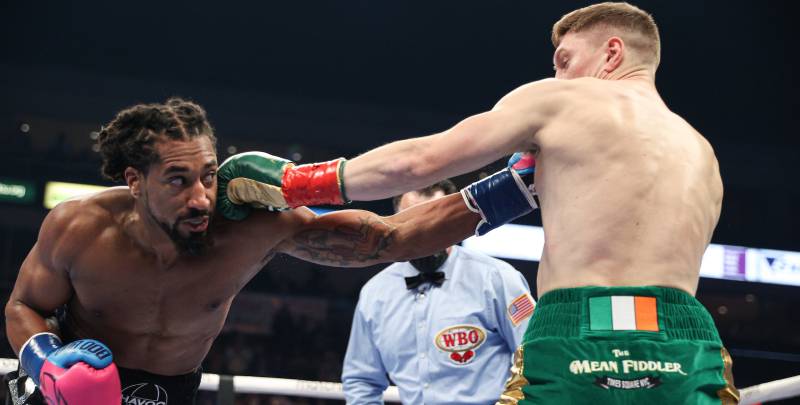 Jason Quigley announces surgery on his broken jaw was a success

Jason Quigley has underwent surgery for the broken jaw he suffered on Friday night in his WBO Middleweight world title fight with Demetrius Andrade.

The Ballybofey man was stopped in the second round in Manchester, New Hampshire but has since revealed on social media that his surgery was a success.

Quigley posted: “Surgery on my jaw was a success.

“Massive thank you (to) the doctors and nurses for doing such a great job and getting me treated so quick.”

Quigley was knocked down in the first round when the punch occurred that cause the injury.

However, he battled on in the second round until the fight was stopped, much to Quigley’s disappointment.

He told fans “I feel disappointed. I’m disappointed that it was over so quickly. I was put down, yeah, but it was like a flash knockdown and I felt as if there was a lot more in me and a lot more to give.

“I’m disappointed that I didn’t have the time to give more. I feel very disappointed for all of the fans who travelled over and came to support me. They didn’t get the right chance to have a better atmosphere.

“I was put down, but I wasn’t hurt. Everything the ref asked me to do, I did it: Take a step left, take a step right, I was almost doing it before him.”

Jason Quigley announces surgery on his broken jaw was a success was last modified: November 24th, 2021 by Dáire Bonnar
Facebook0Tweet0LinkedIn0Print0