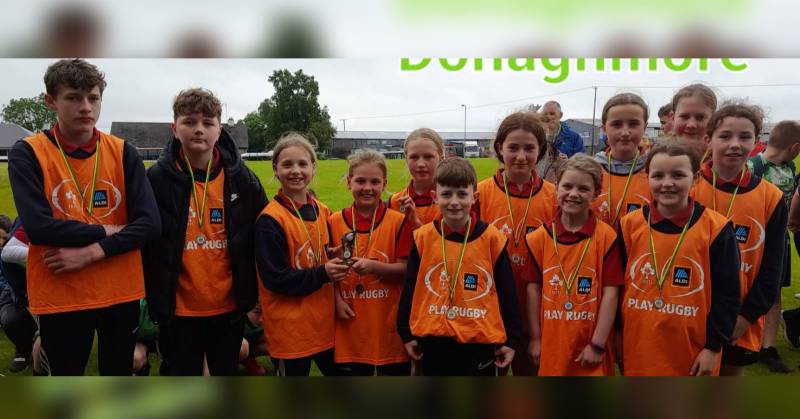 Six schools were involved with the two schools in Raphoe putting forward two teams, namely Raphoe Central and St. Eunans Raphoe as they tried to get the children into playing the sport.

The main rules for this tournament was that there had to be at least 5 girls in every team with usual touch rugby rules in vogue.

First up, the smallest school Welshtown took on the the 5th Form team of the largest school involved, Raphoe Central.

The catch however, was that Welshtown contained six players who normally play rugby week in, week out for Finn Valley Rugby Club and were one of the pre-tournament favourites along with Donoughmore who also had a number of rugby players.

In the first round of matches all went according to the script until Donoughmore played Raphoe Cenral 6th class who had no recognised rugby players.

There obviously had been a bit of practice as the Raphoe speedsters showed the co-favourites who was boss, or maybe they hadn’t warmed up quick enough.

As the tournament progressed with some excellent rugby being played by all teams, Welshtown eventually beat Raphoe central 6th class in a very exciting final by 4 tries to 3.

Donoughmore beat Raphoe 5th Class by 3-0 in the runners up final.

Overall it was a very successful tournament and lots of players got their first taste of competitive touch rugby in a larger field than their school yard.

Lots of players asked about playing rugby and it is great to hear that Finn Valley will be starting both an under 10 boys team and an under 10 girls team next season starting at the beginning of August at Finn Valley Athletic Club on Mondays Wednesdays, and Saturdays.

This takes in 8 and 9 year old players where a slightly milder form of rugby is taught to break them in.

Anyone interested in taking up rugby can ring Allen McCrea on 0863325955 and leave details by text.

If you know nothing about rugby, the club will show you. Come down and try for a couple of sessions to see if it suits you.

Great thanks are due to Royal and Prior School, Raphoe for the use of their excellent pitches to referees Robin McDowell and Tommy Greally and lastly to the schools who took part: Welshtown, Raphoe Central, Lurgybrack, St Eunans Raphoe, St Bridgids Convoy and Donoughmore.