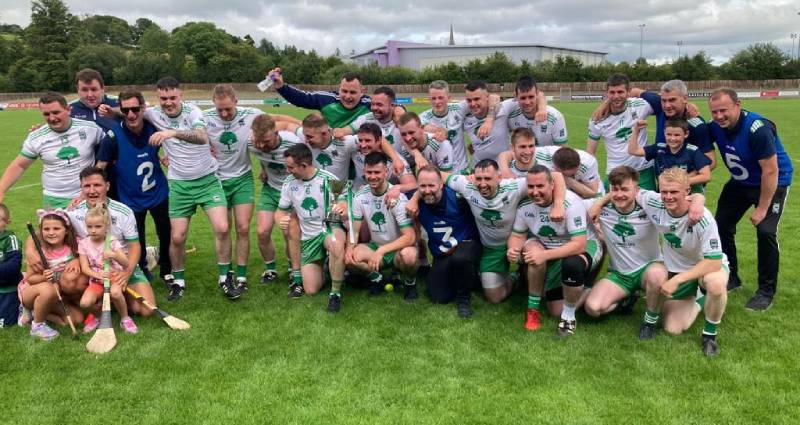 Henderson was clinical from frees, especially in the second half scoring a total of eight including one point from play, while De Ward was given man of the match for four super scores from play.

MacCumhaills had an uphill task at half-time, 1-6 to 0-5 down at the break, thanks to some superb scoring from Cathal Doherty in the first half, scoring 1-4 from play.

And despite being xix points down early in the second half, a 15 minute spell of eight points to one in favour of MacCumhaills turned the game on its head as MacCumhaills took the lead for over a minute for the first time in the game.

The Twin Towns side had the momentum now and despite a brave Carn fightback, helped by Luke White’s free taking, two super scores from Anthony Patton and DeWard sealed the victory by 0-17 to 1-12.

Doherty took two early scores from play for Carn but Henderson cancelled them out with some quality free taking, while PJ Browne gave MacCumhaills a one point lead.

But Carndonagh’s number 15 was everywhere as he kept impressing, with a brilliant score from wide left then seconds later on the right.

DeWard was equal to that though, scoring from the left and the right as he roamed around in the space.

A super goal by Doherty, cutting in on the right and firing into the net from a tight angle, followed by a couple of White frees would see Carn go into the break four points up.

White converted another three frees as Carndonagh looked to pull away but a Henderson free and another DeWard point kept them in sight.

Ten minutes into the second half however, the momentum would swing in MacCumhaills favour.

Inspired by their captain Lee Henderson who scored three points, including a super score from play, while Anthony Patton got one to make it 1-9 to 0-11 and just a point in it.

White scored another free but MacCumhaills would again score four in a row, firstly through another Henderson free.

MacCumhaills won the ball instantly and Fintan Griffin levelled the game for the first time in 20 minutes.

Henderson scored again to give MacCumhaills the lead and substitute David White scored from a tight angle.

Cian Doherty brought it back to a one point game with 10 minutes remaining but Patton quickly restored the two point lead and when DeWard took a brilliant catch, turned and slotted over the bar, the trophy looked to be heading back to Ballybofey.