THE FAMILY of Denis Donaldson, the British spy shot dead near Glenties five years ago this week, have claimed the British security services may hold the key to solving the crime.

They now say they are increasingly frustrated and concerned by the lack of progress in the Garda murder inquiry, claiming they haven’t met officers since 2009.

According to the Donaldson’s a meeting was scheduled for last week but Gardai cancelled it. They want answers to a number of key questions.

In a statement they said: “There are serious discrepancies and anomalies in accounts relating to the circumstances leading up to Denis’ Donaldson’s murder”.

In December 2005 Mr Donaldson received a written warning from police that he was about to be exposed in the media. The family claim he was then telephoned by his Special Branch handler, identified only as ‘Lenny’.

“This call caused Denis to secretly flee Belfast immediately”, the family said. The Sinn Fein man then publicly admitted his role as an agent in Dublin the next day; he then went back into hiding. On the 4th of April 2006 Denis Donaldson was brutally murdered near Glenties.

The Donaldsons continued: “For the Gardai murder inquiry to be effective, thorough and independent it must examine the identities, motivations, activities, links, communications and movements of the Special Branch handler Lenny and his colleagues.

“Lenny is intimately informed about the events surrounding Denis’ murder, Lenny holds the answers to many questions.”

The Provisional IRA denied involvement in the murder – and the Real IRA claimed two years ago that it had carried out the killing. 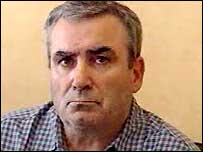 The dissidents are also believed to be targeting others who have been outed as so-called touts.

It’s believed they also want to kill British agent Freddie Scappaticci, the tout known as Stakeknife. Scappaticci – a regular visitor to Donegal – is now living in the Manchester area of England where he runs a scaffolding business. He has had plastic surgery to hide his identity.