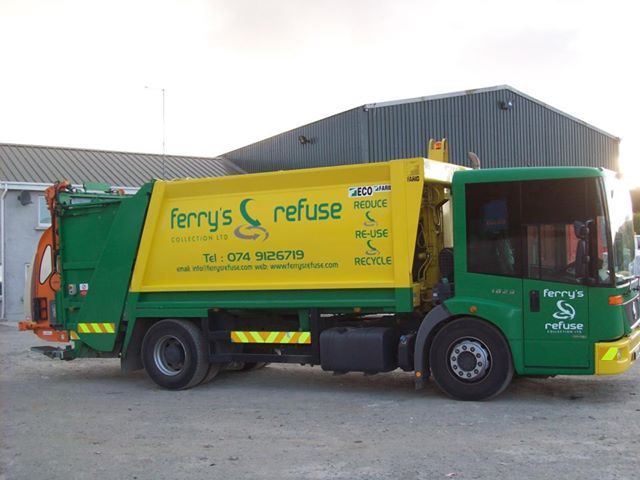 BREAKING NEWS: A leading Donegal waste disposal company boss has been fined €12,000 and received a suspended jail sentence of six months after being found guilty of illegal dumping. 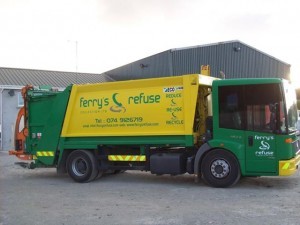 Ferrys is a major employer in Donegal.

Jim Ferry, owner of Ferry Refuse, was also ordered to pay Donegal County Council a total of €30,750 in costs.

The case followed an extensive undercover investigation into Ferry’s illegal dumping activities at lands he owned at Deryreel in Falcarragh.

The court heard that the father-of-six, who employs 60 people, has previous convictions for illegal dumping.

Letterkenny District Court heard how officers from the council along with Gardai carried out a surveillance operation on lands belonging to Ferry.

On June 10th, 2010, a large Ferry’s Refuse truck was seen dumping a large volume of waste into an open crater.

Upon investigation it was found that more than 1,000 cupid metres of waste had been illegally dumped at the site.

It followed an anonymous tip-off by a member of the public who pin-pointed the dumping location to waste management officers.

The court heard that at 5am Mr McClintock and other officers came across two men dumping household waste into a crater.

When they identified themselves, two men in hi-viz jackets with the ‘Ferry Refuse’ on it, ran off into the distance and were not apprehended.

Tis evidence was backed up by various other litter wardens on scene who were employed by Donegal County Council.

The court was also shown a video which showed two men wearing hi-viz Ferry Waste jackets digging holes with a track digger and then dumping rubbish into them before covering them over.

Later that day, another employee of Ferry’s Refuse, Paul Gallagher, approached council officials asking to have the vehicles back.

The court also heard that Ferry, of Rossbracken, Manorcunningham, ignored an order to remove the remaining waste from the site and that it is still present there.

The case was interrupted when a man entered the court and handed a letter to barrister for Mr Ferry, Sean Gillane, SC.

The letter alleged that the man, an unnamed employee of Mr Ferry, was behind the illegal dumping and claimed he had been paid to do so by a competitor of the accused.

The author of the letter was Marty McDermott who later gave evidence in court.

McDermott claimed he was paid €5,000 to dump illegal waste on the lands of waste disposal boss Jim Ferry.

Marty McDermott, 30, claims he took Ferry Refuse trucks on three different occasions to dump at Derryreel, Falcarragh in the summer of 2010.

McDermott said he took the money to pay off debts €500,000 which he built up partially through gambling.

McDermott was giving evidence in the trial of Jim Ferry who is charged with eight different offences of dumping illegal household waste.

This is the third day of the trial.

At the end of the first day before Judge Paul Kelly, a mystery man walked into court and handed in a letter saying he was responsible for the dumping.

That man has turned out to be McDermott who was working as a rubbish lifter at the time for Mr Ferry.

McDermott gave evidence today to say that he was the man behind the dumping.

He claimed he was approached by a man saying he would receive €5,000 if he dumped a load of rubbish at Derryreel.

He said he had been ordered to meet another man at a crossroads in Creeslough but that two men turned up.

Between the three of them they dumped two loads of waste on the land at Derryreel.

Richard Lyons, barrister for Donegal County Council, asked why he had waited until now to come forward.

McDermott said he had been wracked with guilt and went to a priest who told him to go and see a solicitor.

He did this but claimed the solicitor told him to steer clear of giving any evidence in the case.

McDermott said he has never seen his accomplices since.

“I have never seen those men since. I didn’t ask them their names. It’s not what you do. You don’t ask a man’s life story when you were doing what I was doing,” he said.

Barrister Lyons asked McDermott why did he think he was offered such money to do this by the unidentified man.

The letter which McDermott left into court was red out by barrister Lyons.

It explained how he had been supported by Ferry since he was a young man and couldn’t believe what he did.

He explained how he went to see the priest and that solicitor Kieran O’Gorman told him to stay well away from the courts.

“I never thought in my wildest dreams it would come to this. The solicitor told me I would have to pack my bags and leave town and the county because I am sol well known.

“If you think this letter helps and saves my friends jobs,” the letter read.

He denied claims put to him by Mr Lyons that Mr Ferry paid him the money.

“He didn’t pay me,” said McDermott.

Mr Lyons asked if it did not concern him that he was dumping a load of waste directly across the road form Mr Ferry’s mother’s home in broad daylight with plenty of noise going on.

“No. I was just thinking of the money,” answered McDermott.

Judge Paul Kelly retired to consider his verdict and returned to say he was satisfied that he believed Ferry was guilty of all eight charges.

He said he found McDermott’s claims vague and unconvincing and that he did not believe him.

He said he had considered sending Mr Ferry to jail considering he has previous convictions for similar offences but was conscious of his age and the fact that he was a major employer in the area.

He fined Ferry a total of €12,000 for four different offences and also sentenced him to two consecutive terms of six months in prison but suspended each for a period of two years.