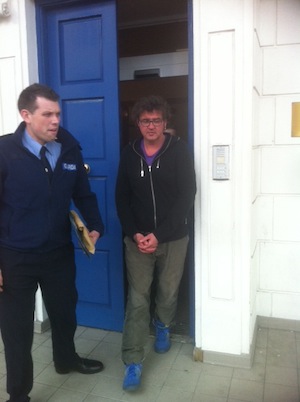 Gardai have arrested a man after the discovery of more than €13,000 of drugs in a car in Co Donegal.

Piotor Lesiek, 47, was stopped by Gardai on Main Street in Ballybofey on Monday afternoon.

He was arrested on suspicion of having drugs and was taken to Letterkenny Garda station.

Lesiek last night appeared at a special sitting of Letterkenny District Court under Section 15 of the Misuse of Drugs Act.

He faces two charges of possession and the sale and supply of drugs.

Garda Inspector David Kelly said they were not objecting to bail but asked for a number of conditions including that Lesiek, with an address in Castlebar, surrender his passport and sign on daily at his local Garda station.

Garda Michael Kilcoyne of Ballybofey Garda station said he was seeking a bail bond o between €3,000 and €4,000 because of the seriousness of the case.

Solicitor for Lesiek, Mr Patsy Gallagher said his client was unemployed and had very little means.

He said the accused could contact friends to get an independent surety.

He also said other people may come before the courts in relation to the incident.

The case was adjourned until Monday next and Lesiek was taken to Castlerea Prison for the sureties to be paid.