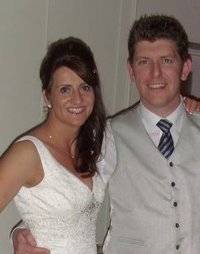 The late Roisin and her husband Stephen.

THE organisation which pays compensation to victims of uninsured drivers is to trying to prevent payment to the friend of a drink driver who killed a Donegal schoolteacher.

Michael Tevlin had been awarded €660,000 for a brain injury suffered in the car crash which left pregnant Fanad woman Roisin Connolly dead.

The High Court however has almost halved that payment by saying 35-year-old Tevlin was 45 per cent negligent by getting into a car driven by a man with whom he had been on a drinking spree.

He had also not been wearing a seatbelt.n.

Mr Justice Kevin Cross ruled the plasterer is entitled to a declaration against the Motor Insurers Bureau of Ireland (MIBI), which compensates victims of uninsured drivers, only up to a limit of €364,000 after he was injured in the crash which was described by the judge as “truly horrific.”

However the MIBI says it will take the case to the Court of Appeal.

Mr Tevlin says he has no memory of the accident when the car veered across a road as the driver – who he had been drinking with earlier – attempted to overtake on the Carrickmacross Bypass, Co Monahgan, on December 27, 2010.

The driver, Kevin McArdle, who was later jailed for dangerous driving, ploughed in to a car driven by Stephen Connolly whose 39-year old pregnant wife, Roisin was killed.

Two 27-year old men, who were also passengers in McArdle’s car, died in the accident.

Mr Tevlin from Lisankisky, Kingscourt, Co Cavan sued Mr McArdle, Longfield, Carrickmacross, Co Monaghan and the MIBI, as a result of the injuries he received in the accident.

Mr Tevlin and Mr McArdle, Mr Justice Cross said, went on what has been “rightly described as a drinking spree” around various licenses premises in Cavan , Louth and Meath.

Mr Justice Cross said it it was contended that because Mr Tevlin allowed himself to be carried by McArdle in the car when both had clearly consumed over the legal limits of alcohol that the driver owed no duty of care to him.

The judge said he could not accept that proposition.

There was a considerable difference between a driver being urged on by the a passenger to speed and what was a tragic result from an enterprise that undoubtedly commenced as a “misguided exercise in post Christmas camaraderie.”

Mr Justice Cross said the negligence of the driver almost always and certainly in this case is greater than that of the passenger.

The judge reduced the award by 35 per cent in relation to allowing himself to be carried and added another 10 per cent reduction for contributory negligence for not wearing a seat belt.