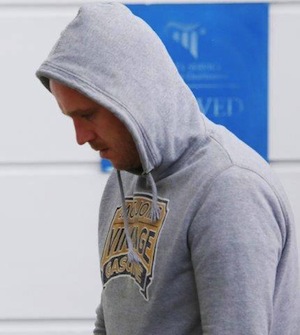 A TWIN TOWNS man has appeared in court charged with arson attacks on an Orange Hall and a Presbyterian Church in Convoy.

Damian Murray, pictured in the grey hoodie, was arrested on Monday evening at an address at Ardmiran Park in Stranorlar, Letterkenny District Court heard.

He was charged with the attacks on Convoy Orange hall – in which it was destroyed – and the Presbyterian Church in the town the early hours of last Friday.

Around €250,000 worth of damage was caused during the incidents.

Defence solicitor Frank Dorrian made an application for bail.

Two dozen people packed into the court to listen to the hearing, some sitting on one side of the court.

Amongst them were members of Convoy Orange Lodge.

Legal aid was granted in the case.

A second man is also appearing in court today, but has not been charged in relation to the arson attacks.