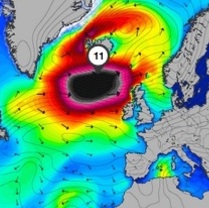 WOW! SUPERSTORM SET TO HIT US ON ‘BLACK WEDNESDAY’

THIS is the massive superstorm heading straight for Donegal next week in what is already being dubbed ‘Black Wednesday’.

The storm, packing hurricane-force winds, is set to hit the North West full-on – and last into Thursday, say forecasters.

Ironically the weather pattern is being tracked by surfers keen to catch some of the world’s largest waves.

Ben Freeston, Head Forecaster with surfers website magicseaweed.com warned: “Where a storm might typically cool as it gets closer to becoming reality the last 48 hours have seen model forecasts intensify the call for a giant North Atlantic storm early next week.

“While differing models have been agreeing on the storm for at least the last 48 hours, this morning we see both this agreement and encouraging signs hinting to the storm’s physical development.

“The latest satellite images show the existence of a predicted cluster of storm activity in the Mid Atlantic that’s the precursor to a developing low forecast to be an integral part of our super system.”

However he says the storm may be just a bit too much – even for the best surfers.

“A rapidly deepening low pressure system is forecast to bottom out at 930 millibars and impact Northern Europe in the middle of next week with waves propagating throughout most of the Atlantic’s western fringe,” he said.

“Whilst storms on this scale are difficult to surf at their full intensity (often excepting Mullaghmore) the magnitude is impossible to ignore.

“Last year we regularly saw hurricane force systems like this with names like Hercules breaking records and sea defences, cutting off train lines, and reshaping our coastline. For surfers it is often a case of seeking shelter, or for Black Wednesday, heading south to the lower reaches of Europe / North Africa should score you cleaner waves.”

You can track the storm here:

WOW! SUPERSTORM SET TO HIT US ON ‘BLACK WEDNESDAY’ was last modified: December 6th, 2014 by John2