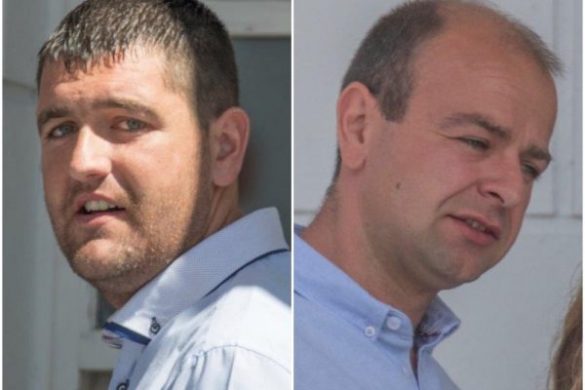 Two Letterkenny men who were part of a gang that caused €82,000 worth of damage  when they were involved in the attempted theft of copper cylinders and piping from an apartment block have avoided jail.

Brendan Dunleavy, 28, of Ballymacool, Letterkenny (above left) and 31-year-old Darren Doherty of Kirkstown, Letterkenny (above right, pics by North West News Pix) were before Letterkenny Circuit Court, each on three counts of criminal damage and burglary in relation to the incident on February 22, 2012.

Dunleavy and Doherty were sentenced to 240 hours of community service each, in lieu of three-and-a-half-year prison terms.

Dunleavy and a third man, a co-accused who was not before the courts as he is currently out of the jurisdiction, entered the premises at Aras Derek Hill Hall on the Port Road in Letterkenny on the night in question, while Doherty acted as a ‘look out’.

Gardai received a report of a male acting suspiciously in the area at 10.45pm. Gardai spoke to the security guard who said he observed a male exiting a Mercedes rigid body lorry, parked in the car park, and fleeing from the scene.

Gardai carried out a search, but were unable to locate the male, while they observed extensive water damage in three of the apartments which had the copper cylinders and piping removed. Two hacksaws and a sledge hammer were found as well as a receipt in the name of the third man and a photocopy of his driving licence.

Dunleavy said he had been in a pub talking with the third man about how ‘times are tough’ and how they were aware that ‘scrap was good old money’.

Prosecution counsel Patricia McLaughlin BL said that Dunleavy told Gardai that he knew that Darren Doherty was ‘short of a few pound’.

Dunleavy and his accomplice made their exit when they noticed lights approaching before running across the field and onto the nearby river bank.

In his statement to Gardai, Doherty said that Dunleavy ‘landed to the house and asked if I was interested in getting a few pound’. After 20 to 30 minutes at the scene in the lorry, Doherty ‘saw lights and ran’, Doherty went to a nearby pub and called a taxi before collecting the other two men, one of whom was Dunleavy, at the Port Bridge.

Barrister for Dunleavy, Damien Crawford, said his client had lost his job over this matter. “He is completely and utterly remorseful. He was recruited to the cause and he didn’t have the original thought himself,” he said.

Barrister for Doherty, Ciaran Elders, said his client was ‘not fully aware that he was committing a crime until he was outside’.

Mr Elders said: “He (Doherty) was only engaged at the very last minute. He did play a very minor role in the crime itself. This was not premeditated by Mr Doherty. It was totally out of character and he is ashamed of his actions. He has shown remorse and this is a serious blot on his copy.”

Judge John O’Hagan outlined the gravity of the crimes, noting that an estimated €82,000 of damage was caused to the apartments, two of which were owned by the same man.

“I cannot get across clearly enough how serious these offences are. They are very serious.

“They were disturbed and had to do a runner. In their trail, they left absolute, complete and utter destruction.”

Judge O’Hagan said he was not impressed with the suggestion that the raid wasn’t planned and noted that it was his belief that the men planned to bring the copper to ‘some unscrupulous scrap dealer’.

He said: “There was a hired vehicle to deliver the goodies and there were tools there for a particular purpose. There must have been a discussion between them to decide what they’d need to do the job.There was a conspiracy between them. How did they know that the property was unoccupied? Someone must have done a recce.”

Regarding Doherty’s part in the crime, Judge O’Hagan added: “Mr Doherty was ‘keeping nix’, as they say. He is equally responsible. The fact that he was just keeping a look out is not an excuse.”

The two defendants each lodged €10,000 with their solicitors by way of compensation. Judge O’Hagan directed that €10,000 be given to each of the two apartment owners.

Judge O’Hagan imposed a three-and-a-half-year prison sentence on each man, but substituted those sentences with 240 hours of community service in each case.

He told the defendants: “You can be very thankful to your counsel. In normal courses, I would have no hesitation in sending you to prison.”