One of Donegal’s All-Ireland winning panel from 2012 has come back into the fold.

Anthony Thompson has ended his inter-county exile and is in line to make a return to competitive action before the end of the Allianz League.

While Saturday evening’s clash with Tyrone will come too soon for the Glenties man, news of Thompson’s imminent restoration to the Donegal squad will come as a major boost following the recent withdrawals of Eoin McHugh, Peter Boyle and Michael Carroll.

The 31-year-old, who has played 92 times for Donegal, opted out of the Donegal squad for the 2017 campaign. 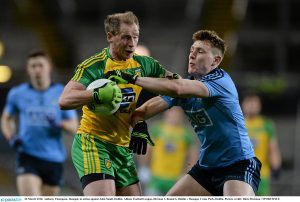 However, Thompson is now to rejoin his Conaill clubmate Leo McLoone and Odhrán Mac Niallais in coming back following a year out.

Thompson spent most of the 2015 season commuting from Essex, England to play before moving home in 2016.

Thompson has not played for Donegal since the All-Ireland quarter-final defeat to Dublin in August 2016. Thompson scored a point in that 1-15 to 1-10 loss at Croke Park.