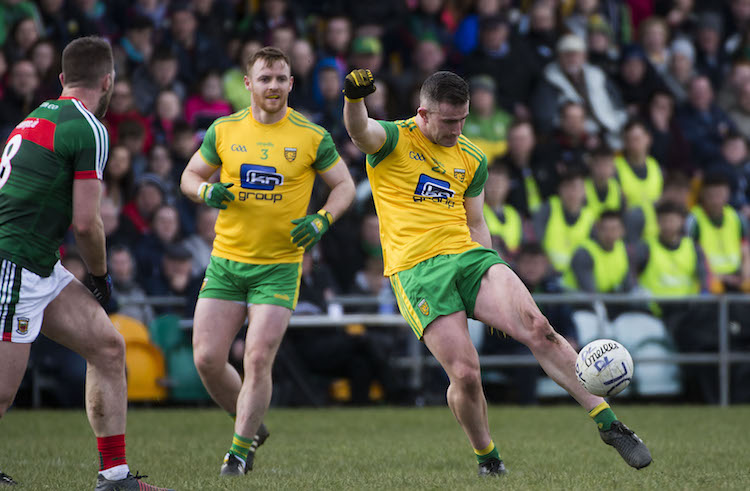 It was survival Sunday with a Championship-like vibe billowing in Ballybofey as Kevin McLoughlin’s last-ditch point saw Mayo relegate Donegal.

The tie hung in the balance right until the end when McLoughlin arrowed over to snatch the draw that Mayo needed to extend their 20-year stay in the top flight. Once more, Mayo’s final day powers came up trumps as McLoughlin, with the penultimate kick of a pulsating afternoon, earned that precious point for Stephen Rochford’s men.

Donegal were livid at the conclusion, arguing they should have been allowed another play with Mayo having halted things in the aftermath of McLoughlin’s score.

It shouldn’t have come to it and it was unfortunate for Donegal that Patrick McBrearty, who had been in inspired form until then, popped a late shot into David Clarke’s hands.

McBrearty, after brilliantly fetching a pass from the almost omni-present Michael Murphy had a split-second to fed the ball inside, but didn\t connect well with his attempt and Mayo broke to punish the hosts with the ultimate sanction to end Donegal’s four-year stay in Division 1.

The inclusion of McBrearty, just as the Donegal team was in their pre-match huddle, didn’t come as a seismic surprise with Chinese whispers in the air for most of the morning – but it certainly was a signal of Donegal’s intent

The Kilcar man had been a big doubt in the lead-up after a calf injury forced his absence from the recent defeats to Tyrone and Monaghan.

A mix of the sublime and the ridiculous from McBrearty gave Donegal a foothold, after Mayo had raced clear early on.

Donegal kicked seven in-a-row in a 16-minute spell to lead by three –  including two wonder points by McBrearty – at half-time.

A 23rd minute point from McBrearty, despite falling awkwardly and under immense pressure from Caolan Crowe, managed to defy all laws of trigonometry as he bent over a stunning score.

Attempting it was the mark of a player high in confidence. Executing it was something else entirely.

McBrearty went to the sublime, punting over from 50 metres and a free from distance increased his impressive yardage to put Donegal three to the good.

Since the restructuring of the Leagues in the late 1990s, Mayo had never been outside the top flight and Donegal entered this one boasting a 19-game unbeaten League and Championship record inside the confines of Sean MacCumhaill Park.

The Ballybofey venue wasn’t quite bursting at its seams, but a crowd of 11,250 was in line with the high stakes of the afternoon.

Mayo, spurred by Andy Moran, started like an express train and were 0-5 to 0-1 ahead by the tenth minute.

Moran, after only 31 seconds, clipped Mayo in front and, after Frank McGlynn raided up to get Donegal level, the Westerners made hay.

Donegal were thankful to goalkeeper Shaun Patton’s reflexes in the seventh minute. Diarmuid O’Connor, fed by Moran, saw his initial effort beaten down by Patton and the St Eunan’s man was able to keep out the follow-up.

Moran fisted over a point and when the veteran forward got in behind the Donegal rearguard soon after the writing was etched on the wall.

Moran eyed up the top corner of Patton’s goal, but his shot – having evaded the shackles to reach onto Conor Loftus’ pass – flashed just over.

The clocks changed overnight and Donegal rubbed the sleep from their eyes to get back onto an even keel again.

Ciaran Thompson, Eoghan Ban Gallagher, Michael Murphy and Jamie Brennan – all of whom turned in fine displays for the home side – raised the decibels before McBrearty had the big attendance speechless.

Six minutes into the second half, Tom Parsons squeezed in around the home defence, but couldn’t get the required direction on his shot as Donegal sighed in relief.

Four points from Conor Loftus had Mayo breathing on the hairs of the Donegal necks, but Jamie Brennan, 13 minutes from the end, steadied the nerves.

Loftus snatched wide in the 61st minute, though the Mayo frontman appeared to have been fouled as he jinked into position and it was a let-off for Donegal as they clung to their lot.

Brennan and MacNiallais – with a monster effort from the left flank – pulled Donegal three clear again, but another Loftus free – his sixth point of the afternoon – served as a reminder that Mayo weren’t leaving without a fight.

Corner-back Eoin O’Donoghue brought hope to Mayo and there was still time for a final, vital twist.