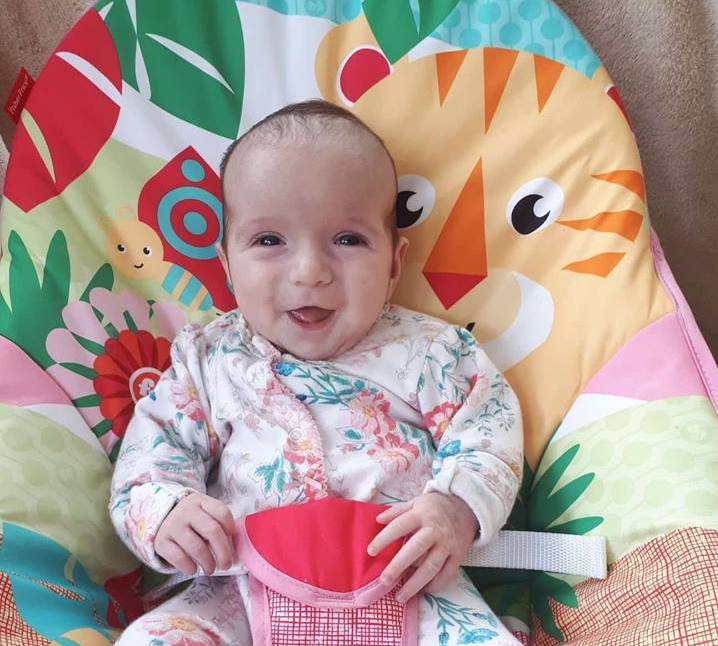 Meet Heidi – the Donegal baby given a ‘zero per cent’ chance

written by Chris McNulty May 23, 2018
Facebook0Tweet0LinkedIn0Print0

It was in a small room of Letterkenny University hospital when Ballindrait couple Louise and Eddie heard the sentence that turned their lives upside down.

After her 12-week scan in Letterkenny, there were indications that their baby would be born with Down’s Syndrome.

The nurse sat them down and told the couple that the baby, in all likelihood, had Edward’s Syndrome, Petru’s Syndrome or Turner’s Syndrome.

Whatever the exact diagnosis, the message was clear and chilling: ‘There is a zero per cent chance that this baby will survive’.

A follow-up check was arranged and Louise clung onto hope: ‘What is the chance that all of this will be for nothing and our baby will be okay?’ she ventured.

The response knocked her for six.

“There is absolutely no chance. I’m sorry. Your baby will not survive”

Louise recalls how the nurse explained that as her pregnancy progressed, the build up of fluid would get too much.

The nurse continued: “That will end your baby’s life or you may be lucky as I’ve seen before that a baby has survived one or two hours after birth – but no longer.”

The initial scans had showed a lot of fluid around the baby’s neck, back and abdomen – signs of Down’s Syndrome.

“Looking back, she was taking a long time checking every angle,” Louise says now. “We were just so excited, lying there watching our little baby on the screen. Our world soon came crashing down on us when the nurse uttered the words.”

A senior medic confirmed what the nurse had seen.

“I was just sitting there numb with tears tripping me. She was still speaking and the news was getting worse” Louise says.

“Down’s Syndrome was the best case scenario, but knowing my lovely wee cousin who brightens ups the life of everyone who meets her, I told the nurse: ‘Babies can survive with Down’s Syndrome, sure.’

“The nurse agreed, but said that our baby would be different.”

The nurse explained the fluid would smother the baby’s organs.

‘That will be what will kill your baby,’ the nurse told the distraught couple.

Louise says: “We went home with our hearts shattered, thinking about burying our wee baby.

“We were in the frame of mind just to let nature takes its course. It would have broken our hearts to see our baby grow through the months and know that we would have to say goodbye. It was his or her choice when the heart stopped beating, not our’s.”

Further scans Louise underwent in Dublin offered hope and a higher chance of around 40 per cent. Still, the danger was clear.

“We had a very worrying few weeks of waiting,” Louise says.

“But all the results came back and told us that our baby had NONE of the syndromes that would end his or her life. We were told that the baby might have something wrong with the organs but it would be 20 weeks before we’d know.”

The scans came back perfect and on March 3rd little Heidi was born.

“Heidi is 100 per cent well, happy and healthy, thanks be to God,” Louise beams,

“She is a gorgeous, healthy wee gem of a baby.

“If anyone is ever in this position, there IS hope at the end of the dark tunnel.

“If abortion was an option and we were a couple to go down that road – which we wouldn’t – it shows you that little babies like Heidi could be aborted when there is nothing life-threatening wrong with them.”

If you have been affected by this article, support is available with Leanbh Mo Chroi – a parent group for women and men who have experienced a fatal or severe diagnosis during pregnancy. Visit lmcsupport.ie for details.

Donegal Daily welcomes accounts and letters from both sides of the debate ahead of the referendum to repeal the Eighth Amendment. To get in contact, email info@donegaldaily.com