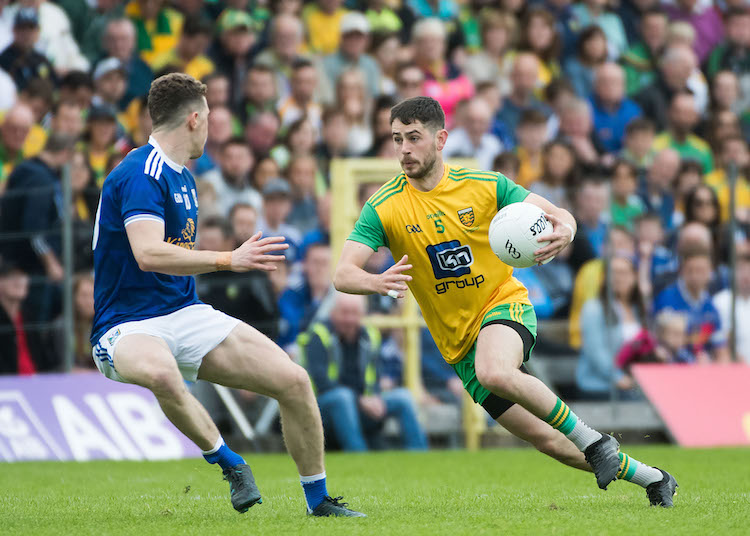 FAMILIAR SIGHTS and sounds by now in Clones as St Tiernach’s Park, again, became a corner of Donegal after Declan Bonner’s side defeated Cavan in the Ulster final.

The Hills of Donegal rang out around the old stadium as Donegal took their tenth Ulster crown and Michael Murphy got his paws on the Anglo Celt for the fifth time.

With 12 minutes to go, and with Donegal leading by six points, Jamie Brennan put the game beyond reach – but there was still time for Cavan to score two late goals

Brennan powered in from the left channel. The Bundoran flier had Padraig Faulkner and Jason McLoughlin breathing heavily but Brennan struck gold with an improvised finish when the ball had fallen from his clutch.

Brennan’s goal ought to have extinguished any flames of hope for Cavan, but Conor Madden batted home from Cian Mackey’s ball in to reduce the arrears. Patrick McBrearty had just thundered over the crossbar at the other end when Mackey was given too much time to cut in and arrow across to the far post for Madden to net.

It was deep into the added minutes when Stephen Murray rose to divert a hopeful ball beyond Shaun Patton for a second Cavan goal and it felt like a trick of the mind that there were just four points in it by that stage.

The blue hoards upon the Hill and around Clones was evidence of what the day meant for Cavan, appearing in a first final in 18 years and searching for a first Anglo Celt Cup since the Martin McHugh-managed class of 1997.

Declan Bonner was manager of Donegal 22 years ago, when Cavan overcame Donegal on their way to the decider. Back for a second stint last year, Bonner as managed to keep Donegal dining at the top table with Tír Chonaill in their eighth final in nine years.

Donegal might have had a goal in the 22nd minute when Paddy McGrath found himself on the edge of the square. The Ardara man worked himself into position and, as he lost his balance, prodded just wide of the far post. The margin was about as minimal as could be.

There was a moment of warning and panic down the other end when Conor Rehill rose to catch from Gerard Smith’s hopeful ball in. With Donegal’s rearguard caught out, Rehill couldn’t find his composure and fired wide with a glorious chancer to peg back the deficit.

A Jamie Brennan brace bookended scores from Murphy, Jason McGee and Ciaran Thompson as Donegal moved in front by eight.

Although Oisin Pierson and Gearoid McKiernan pointed for Cavan, Niall O’Donnell and Brennan gave Donegal a commanding 0-13 to 0-4 lead as they headed for their refreshments.

Bonner sprung a late surprise with the inclusion of Odhrán McFadden-Ferry for his Donegal debut. The Gaoth Dobhair man began with the job of shacking Martin Reilly and it was a task he didn’t take long in warming to.

O’Donnell pulled two early efforts wide, but Donegal were 0-5 to 0-1 ahead by the 11th minute with a soaring point by the towering Hugh McFadden the pick of the early bunch.

McFadden hammered over after a patient right-to-left move from Donegal that saw the ball pass through the hands of Murphy, O’Donnell, Ciaran Thompson, Stephen McMenamin and Gallagher, who offloaded to his Killybegs colleague.

Neil McGee, booked for his part in a seventh minute incident, provided the assist for Murphy to swing Donegal four in front.

Cavan were only able to plug holes and the day might have panned rather differently had Conor Brady continued a piercing run through the middle. As Brady galloped, Donegal surely feared the worst, but the Gowna man opted to fist over when a goal was very much on.

Conor Moynagh and McKiernan stemmed the tide, but Donegal found their groove with five points in rapid succession to move firmly into the driving seat.

A pair of sumptuous Patrick McBrearty points had Donegal up by nine but Cavan were energised when McKiernan (2) and Dara McVeety put wind in their sails.

The goals from Madden and Murray rose the decibels, but a free from Michael Murphy gave Donegal sealed a five-point win and Goats Don’t Shave’s old number was blaring from the tannoys.